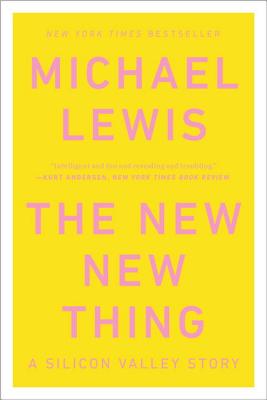 New York Times Bestseller. “A superb book. . . . [Lewis] makes Silicon Valley as thrilling and intelligible as he made Wall Street in his best-selling Liar’s Poker.”—Time

In the weird glow of the dying millennium, Michael Lewis set out on a safari through Silicon Valley to find the world’s most important technology entrepreneur. He found this in Jim Clark, a man whose achievements include the founding of three separate billion-dollar companies. Lewis also found much more, and the result—the best-selling book The New New Thing—is an ingeniously conceived history of the Internet revolution.


Praise For The New New Thing: A Silicon Valley Story…

The most significant business story since the days of Henry Ford. . . . Lewis achieves a novelistic elegance.
— Boston Globe

Remarkable. . . . Clark proves to be a character as enthralling as any in American fiction or non-fiction. . . . [A] great story . . . with prose that ranges from the beautiful to the witty to the breathtaking.
— Fred Moody - Wall Street Journal

A splendid, entirely satisfying book, intelligent and fun and revealing and troubling in the correct proportions, resolutely skeptical but not at all cynical.
— Kurt Andersen - New York Times Book Review