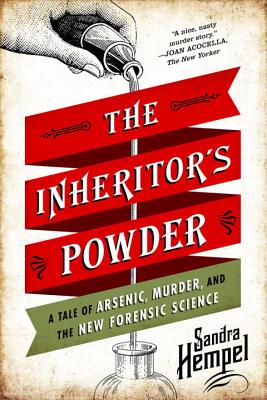 A Tale of Arsenic, Murder, and the New Forensic Science

Available at any corner shop for little money and, because tasteless, difficult to detect in food or drink, arsenic was so frequently used by potential beneficiaries of wills in the first half of the nineteenth century that it was nicknamed “the inheritor’s powder.” But after wealthy George Bodle died under suspicious circumstances, leaving behind several heirs, the chemist James Marsh was brought in to see if he could create an accurate test pinpointing the presence of arsenic and put this Victorian scourge to rest.


Praise For The Inheritor's Powder: A Tale of Arsenic, Murder, and the New Forensic Science…

Sandra Hempel has brilliantly researched a famous arsenic poisoning of 1833…This fascinating book could well be the next The Suspicions of Mr. Whicher.

— John Emsley, author of The Elements of Murder: A History of Poison

Part of an honored English tradition…[T]his story still delivers the old shock: that someone actually plotted and accomplished the death of another human being.
— Joan Acocella

Readers of Sandra Hempel’s un-put-downable true crime narrative will not only find themselves caught up in a grippingly suspenseful murder mystery; they will be treated to a string of brilliantly delivered lessons on everything from the origins of toxicological science to pre-Victorian medical practices to the beginnings of modern forensic detection. I can’t think of another recent work that so thrillingly fulfills the two major aims of literary art: to delight and instruct.
— Harold Schechter, author of The Devil’s Gentleman: Privilege, Poison, and the Trial that Ushered in the Twentieth Century

Hempel weaves a diabolical tale of fractured families, their poisonous deeds, and the early scientists who found new ways to expose history’s oldest crime. Told with verve and a keen eye for suspense, The Inheritor’s Powder is a great detective story all the way to the very last page.

— Holly Tucker, author of City of Light, City of Poison

Hempel skillfully weaves whodunit and courtroom drama to take us back to the beginnings of the controversial science of forensic toxicology.
— Hugh Aldersey-Williams, author of Periodic Tales and Anatomies

This book will appeal to readers interested in the origins of forensic science as well as to readers of popular histories of science. Though nonfiction, it will likely appeal to mystery readers as well, with its vivid details, cast of potential poisoners, and curious twists in plot.

Hempel’s fascinating look at how the science of poison detection developed is certain to draw in readers with its masterful combination of telling details, engrossing prose, and drama… The Bodle case reads like something out of Dickens, and those fascinated by modern shows like CSI will delight in learning about the field’s early days.

Sandra Hempel is a medical journalist whose work has appeared in the Times, the Sunday Times, and the Guardian. The author of The Inheritor's Powder and the award-winning The Strange Case of the Broad Street Pump, she lives in London.
Loading...
or
Not Currently Available for Direct Purchase