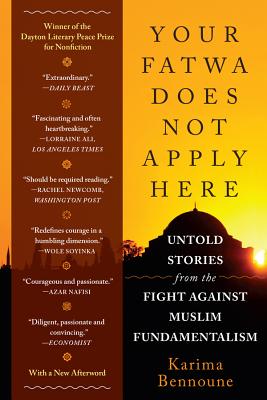 Your Fatwa Does Not Apply Here

Untold Stories from the Fight Against Muslim Fundamentalism

In Pakistan, Faizan Peerzada staged a performing arts festival despite bomb attacks. In Algeria, radio comedian Mohamed Ali Allalou lampooned fundamentalists on the airwaves. Karima Bennoune illuminates these and other inspiring stories of the Muslim writers, artists, doctors, lawyers, activists, and educators who often risk death to combat the rising tide of religious extremism within their own countries. From Karachi to Tunis, Kabul to Tehran, these heroic trailblazers represent one of the best hopes for ending fundamentalist oppression worldwide.

Praise For Your Fatwa Does Not Apply Here: Untold Stories from the Fight Against Muslim Fundamentalism…

These are stories of resistance and resilience…that are seldom, if ever, told by mainstream Western media…Bennoune has written a very necessary book indeed, and it is to be hoped that it will find the widest audience possible.
— Julia Droeber - Times Higher Education

Extraordinary stories…These varied and unremitting testimonies to this unarmed war shatter the monolith we have conjured up and dubbed ‘the Muslim world.’
— Daily Beast

[Bennoune’s] reporting is diligent, passionate and convincing…[Her] strongest stories are also her most bitterly personal…With courage and empathy, she takes readers to hardscrabble streets where Islamist militias unleashed a wave of almost indiscriminate butchery.
— Economist

Karima Bennoune is a professor of international law at the University of California–Davis School of Law. She grew up in Algeria and the United States and now lives in northern California.
Loading...
or support indie stores by buying on
(This book is on backorder)