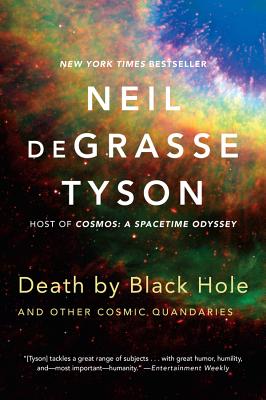 And Other Cosmic Quandaries

Loyal readers of the monthly "Universe" essays in Natural History magazine have long recognized Neil deGrasse Tyson's talent for guiding them through the mysteries of the cosmos with clarity and enthusiasm. Bringing together more than forty of Tyson's favorite essays, Death by Black Hole explores a myriad of cosmic topics, from what it would be like to be inside a black hole to the movie industry's feeble efforts to get its night skies right. One of America's best-known astrophysicists, Tyson is a natural teacher who simplifies the complexities of astrophysics while sharing his infectious fascination for our universe.

Praise For Death by Black Hole: And Other Cosmic Quandaries…

Dr. Tyson has a grand time dissecting certain forms of foolishness. Get it, plan to savor it
— Angela Gunn - USAToday.com

Tyson comes across as having an excellent grasp of the current state of astrophysics, cosmology, chemistry and other scientific disciplines... he conveys knowledge clearly to the nonspecialist, often with ingratiating humor and wit.
— Roy E. Perry - The Tennessean

Neil deGrasse Tyson is an astrophysicist with the American Museum of Natural History, host of the hit radio and Emmy-nominated TV show StarTalk, and the New York Times best-selling author of Astrophysics for People in a Hurry and Accessory to War: The Unspoken Alliance Between Astrophysics and the Military. He lives in New York City.
Loading...
or support indie stores by buying on