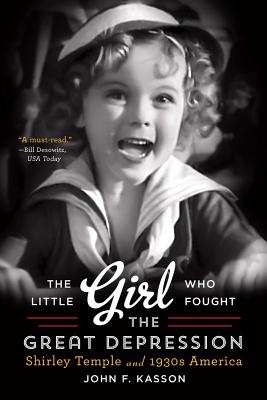 The Little Girl Who Fought the Great Depression (Paperback)

For four consecutive years she was the world’s box-office champion. With her image appearing in periodicals and advertisements roughly twenty times daily, she rivaled FDR and Edward VIII as the most photographed person in the world. Her portrait brightened the homes of countless admirers, among them J. Edgar Hoover, Andy Warhol, and Anne Frank.

Distinguished cultural historian John F. Kasson shows how, amid the deprivation and despair of the Great Depression, Shirley Temple radiated optimism and plucky good cheer that lifted the spirits of millions and shaped their collective character for generations to come.

John F. Kasson is a professor of history and American studies at the University of North Carolina–Chapel Hill and the author of Amusing the Million, among many other seminal works of cultural history. He lives in Chapel Hill.

Praise For The Little Girl Who Fought the Great Depression: Shirley Temple and 1930s America…

A remarkable dual biography: the story of Temple’s brief reign over Hollywood, but also the story of an entire country, which took its cues from such an unlikely source.

In a time of widespread suffering and frequent despair, this little girl touched the hearts of millions of people in our own land and others… John F. Kasson shows how her films provided therapy as well as entertainment.
— Richard Striner

John Kasson delights the reader with his lively account of feel-good films starring the adorable curly-headed moppet who, with radiant smile and winsome guile, lit up the dark nights of the 1930s. A brilliant analyst, Kasson lays bare coruscatingly, too, how exploited child actors serve as canaries in the mine shaft of modern consumer culture.
— William E. Leuchtenburg, author of In the Shadow of FDR: From Harry Truman to Barack Obama