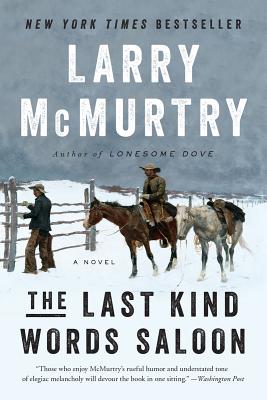 The Last Kind Words Saloon marks the triumphant return of Larry McMurtry to the nineteenth-century West of his classic Lonesome Dove.

In this "comically subversive work of fiction" (Joyce Carol Oates, New York Review of Books), Larry McMurtry chronicles the closing of the American frontier through the travails of two of its most immortal figures, Wyatt Earp and Doc Holliday. Tracing their legendary friendship from the settlement of Long Grass, Texas, to Buffalo Bill's Wild West Show in Denver, and finally to Tombstone, Arizona, The Last Kind Words Saloon finds Wyatt and Doc living out the last days of a cowboy lifestyle that is already passing into history. In his stark and peerless prose McMurtry writes of the myths and men that live on even as the storied West that forged them disappears. Hailed by critics and embraced by readers, The Last Kind Words Saloon celebrates the genius of one of our most original American writers.


Praise For The Last Kind Words Saloon: A Novel…

Such a comfortable Western that Sam Elliott might as well be narrating it directly into your ear. McMurtry intersperses comedy and romance…And once again, he's written some smart, tough women and a bunch of men who have no idea what to make of them.
— Laura Collins-Hughes - Boston Globe

A beautiful, dreamy, deeply melancholy book, connecting legend and disparate threads of history in a seamless pastiche of tall tales drawn against the context of their real circumstances.
— Nathan Pensky - The Onion

[The Last Kind Words Saloon] is never dull, and it’s also very funny. As always, McMurtry's characters are plain-spoken but subtle and full of dry humor…Moseying along with McMurtry is always worthwhile.

Larry McMurtry is an award-winning novelist, essayist, and avid bookseller and collector, who won an Academy Award for the screenplay of Brokeback Mountain with cowriter Diana Ossana. Awarded in 2014 the National Humanities Medal for his body of work, his novels include Lonesome Dove and, most recently, The Last Kind Words Saloon. He lives in Archer City, Texas.
Loading...
or support indie stores by buying on