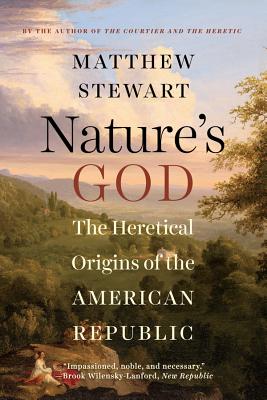 The Heretical Origins of the American Republic

Longlisted for the National Book Award. Where did the ideas come from that became the cornerstone of American democracy?

America’s founders intended to liberate us not just from one king but from the ghostly tyranny of supernatural religion. Drawing deeply on the study of European philosophy, Matthew Stewart brilliantly tracks the ancient, pagan, and continental ideas from which America’s revolutionaries drew their inspiration. In the writings of Spinoza, Lucretius, and other great philosophers, Stewart recovers the true meanings of “Nature’s God,” “the pursuit of happiness,” and the radical political theory with which the American experiment in self-government began.

Praise For Nature's God: The Heretical Origins of the American Republic…

[A] splendidly polemical account of the philosophy of the founding fathers.
— Jonathan Ree - Prospect (UK)

— Peter S. Onuf, author of The Mind of Thomas Jefferson

Splendid…imaginative but never fanciful, even at its most surprising.
— Alan Ryan, author of The Making of Modern Liberalism

A lively, powerful, and erudite refutation of the myth that the framers of our secular Constitution had any intention of founding an orthodox Christian nation.
— Susan Jacoby, author of Freethinkers: A History of American Secularism

Matthew Stewart is the author of Nature's God: The Heretical Origins of the American Republic, The Courtier and the Heretic: Leibniz, Spinoza, and the Fate of God in the Modern World and The Management Myth: Debunking the Modern Philosophy of Business. He lives in Boston, Massachusetts.
Loading...
or
Not Currently Available for Direct Purchase