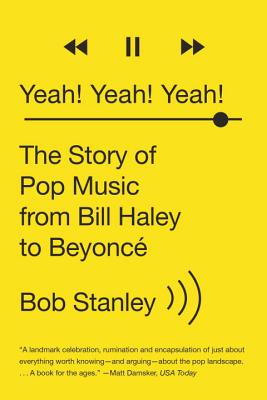 The Story of Pop Music from Bill Haley to Beyoncé

"[Stanley is] as clear-eyed about music as he is crazy in love with it." —Mikael Wood, Los Angeles Times

A monumental work of musical history, Yeah! Yeah! Yeah! traces the story of pop music through songs, bands, musical scenes, and styles from Bill Haley and the Comets’ “Rock around the Clock” (1954) to Beyoncé’s first megahit, “Crazy in Love” (2003). Bob Stanley—himself a musician, music critic, and fan—teases out the connections and tensions that animated the pop charts for decades, and ranges across the birth of rock, soul, R&B, punk, hip hop, indie, house, techno, and more. Yeah! Yeah! Yeah! is a vital guide to the rich soundtrack of the second half of the twentieth century and a book as much fun to argue with as to quote.

Bob Stanley has worked as a music journalist, DJ, and record-label owner, and is the cofounder and keyboard player for the band Saint Etienne. He lives in London.

Praise For Yeah! Yeah! Yeah!: The Story of Pop Music from Bill Haley to Beyoncé…

Like War and Peace, but with a beat…[E]ndlessly readable.

As good ‘a story of pop music’ as a fan could hope for.
— Ryan Little

[An] exuberant celebration of the silly and the sublime…[Stanley’s] writing delights and surprises, and his description of the music makes you want to dance to it.
— Sarah Larson

Rich with musical history lived, worked, and felt…Yeah! Yeah! Yeah! is smart, funny, surprisingly deep for just how broad it is, but, most of all, for stars and songs great and small, it is full of love

Quixotic and kaleidoscopic, Yeah! Yeah! Yeah! serves up erudite irreverence on every page. Like its sprawling subject, it invites everyone in for a listen.

This book will be remembered and deserves to be.
— Robert Christgau

A landmark celebration, rumination and encapsulation of just about everything worth knowing—and arguing—about the pop landscape… A book for the ages.
— Matt Damsker

Bob Stanley loves and finds surprising connections between a thousand kinds of pop. He makes me want to run to the nearest record store—and move in.
— Stephin Merritt of the Magnetic Fields

Yeah! Yeah! Yeah! ties together the disparate strands of pop’s shape-shifting history to create a vivid living document of the music of our lives.