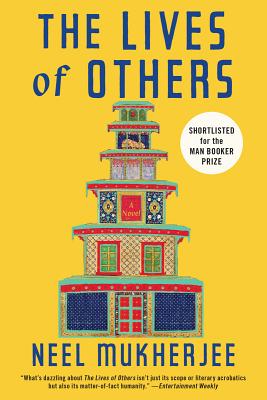 The Lives of Others

Shortlisted for the Man Booker Prize, this “dazzling” (Entertainment Weekly) saga of epic scope is both a family and a political drama.

The aging patriarch and matriarch of the Ghosh family preside over their large household, made up of their five adult children and their respective children, unaware that beneath the barely ruffled surface of their lives the sands are shifting. Each set of family members occupies a floor of the home, in accordance to their standing within the family. Poisonous rivalries between sisters-in-law, destructive secrets, and the implosion of the family business threaten to unravel bonds of kinship as social unrest brews in greater Indian society. This is a moment of turbulence, of inevitable and unstoppable change: the chasm between the generations, and between those who have and those who have not, has never been wider. The eldest grandchild, Supratik, compelled by his idealism, becomes dangerously involved in extremist political activism—an action that further catalyzes the decay of the Ghosh home.

Ambitious, rich, and compassionate, The Lives of Others anatomizes the soul of a nation as it unfolds a family history, at the same time as it questions the nature of political action and the limits of empathy. It is a novel of unflinching power and emotional force.


Praise For The Lives of Others…

Haunting...Mukherjee can recall Tolstoy in his ability to bring to life a diverse and expansive set of characters and to sharply invoke interior worlds…[it’s] a sophisticated meditation on suffering that invites empathy for characters who embrace violent ideologies as a result of injustice without ever vindicating the horrific violence they commit.
— Hirsh Sawhney - New York Times Book Review

Searing, savage, and deeply moving: an unforgettably vivid picture of a time of turmoil.
— Amitav Ghosh

A devastating portrayal of a decadent society and the inevitably violent uprising against it. . . . It is ferocious, unsparing, and brutally honest.
— Anita Desai

Very ambitious and very successful. . . . . One of Mukherjee’s great gifts is precisely his capacity to imagine the lives of others. . . . Neel Mukherjee terrifies and delights us simultaneously.
— A. S. Byatt - Guardian

Masterful. . . . His fierce intelligence and sophisticated storytelling combine to produce an unforgettable portrait of one family riven by the forces of history and their own desires.
— Patrick Flanery - Daily Telegraph

Unfailingly beautiful. . . . Resembles a tone poem in its dazzling orchestration of the crescendo of domestic racket. His eye is as acute as his ear: the physicality of people and objects is delineated with a hyper-aesthetic vividness.
— Jane Shilling - New Statesman

Mukherjee’s scope is vast yet so intimately personal that it’s easy imagine him donning different costumes for the characters as he composes their stories… How he accomplished such a wonderful feat is unknown. What is known is that this novel stands as a literary boon. Short-listed for the Man Booker Prize, its American edition was rushed into print.
— Booklist, Starred review

A devastatingly detailed account… This challenging epic has the scope of a political novel and the humanity of a family saga without sentimentality.
— Publishers Weekly

Breathtakingly tense… the force of this journey hits you in waves.
— Entertainment Weekly

Calcutta-born Neel Mukherjee is the author of three acclaimed novels. A State of Freedom was a New York Times Editors’ Choice and The Lives of Others was shortlisted for the Man Booker Prize. Mukherjee divides his time between London and the US.
Loading...
or support indie stores by buying on