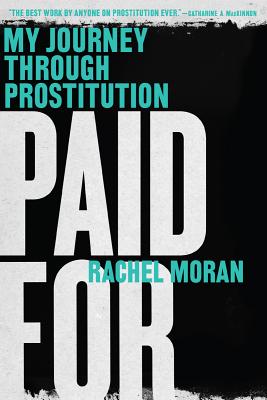 My Journey Through Prostitution

An astonishingly brave memoir of prostitution and its lingering influence on a woman’s psyche and life.

“The best work by anyone on prostitution ever, Rachel Moran’s Paid For fuses the memoirist’s lived poignancy with the philosopher’s conceptual sophistication. The result is riveting, compelling, incontestable. Impossible to put down. This book provides all anyone needs to know about the reality of prostitution in moving, insightful prose that engages and disposes of every argument ever raised in its favor.” —Catharine A. MacKinnon, law professor, University of Michigan and Harvard University

Born into a troubled family, Rachel Moran left home at the age of fourteen. Being homeless, she was driven into prostitution to survive. With intelligence and empathy, she describes the exploitation she and others endured on the streets and in the brothels. Moran also speaks to the psychological damage inherent to prostitution and the inevitable estrangement from one’s body. At twenty-two, Moran escaped the sex trade. She has since become a writer and an abolitionist activist.


Praise For Paid For: My Journey Through Prostitution…

This is surely the best, most personal, profound, eye-opening book ever written about prostitution—irrefutable proof of why it should NEVER be legalized.
— Jane Fonda

People who are working to end sexual exploitation will take heart from her example of transformation and an insistence on basic human dignity.
— President Jimmy Carter

Rachel Moran takes us where no readers have ever gone: into the deep hell of being prostituted… Anyone who believes "sex work" is chosen or a job like any other should read Paid For for its exposure of misinformation and myths alone. But the book is more: Moran writes so well that her story will scorch your heart….

No amount of theory from those who have never been prostituted can replace the truth and power of experience. Rachel Moran's Paid For should be required reading in courses on human rights, in police training and law schools, and in sex education courses that separate welcome sex from body invasion.

Paid For fuses the memoirist's lived poignancy with the philosopher's conceptual sophistication. The result is riveting, compelling, incontestable. Impossible to put down.

As a survivor, I can say Paid For got to the heart of what sex-trafficked and prostituted women face on a daily basis. Rachel speaks for those survivors who can’t speak for themselves, and for those who have been lost to the life.

Paid For is the political sword we desperately need to slay once and for all the myths and fairytales surrounding the sex trade. Sojourner Truth once said that truth is powerful and it prevails. Rachel Moran's earth-shaking book embodies just that.

Rachel Moran demolishes the “Pretty Woman” myth with the stark reality of the lived experience of her young years in prostitution. This memoir makes a strong case for the Nordic model law that criminalizes the buyers whose money drives the trade that treats women as objects for sale.
— Terry O'Neill, President, National Organization for Women

Rachel Moran is the founder of the organization SPACE International (Survivors of Prostitution-Abuse Calling for Enlightenment). She has a bachelor’s degree in journalism and a master’s degree in creative writing and speaks globally on prostitution and sex-trafficking. She lives in Dublin, Ireland.
Loading...
or support indie stores by buying on