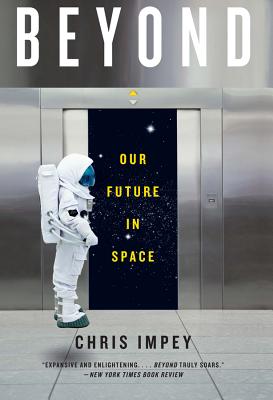 One of the most accessible accounts of the history of rockets and space travel I have ever read . . . entertaining and informative.
— John Gribbin - Wall Street Journal

Chris Impey manages to rejuvenate that ‘Space Is Our Future’ feeling that pervaded human culture a half century ago. A needed reminder that, today, not enough of us are looking up, and even fewer among us are doing anything about it.
— Neil deGrasse Tyson, astrophysicist, American Museum of Natural History

A must-read for anyone interested in the fate of the human race and our bright future among the stars. Chris Impey shows how our efforts to expand beyond Earth are part of the same biological drive that made humans spread their habitat across the face of the Earth.
— Ben Bova, bestselling author and president emeritus of the National Space Society

So much fun to read that it is hard to think of it as a major reference work on space travel—history, current status, and the wild blue yonder. But it is!
— Owen Gingerich, Harvard-Smithsonian Center for Astrophysics

Chris Impey is a distinguished professor in the Department of Astronomy at the University of Arizona and the critically-acclaimed author of Beyond, How It Began, and How It Ends, and four other books, as well as two astronomy textbooks. He lives in Tucson, Arizona.
Loading...
or
Not Currently Available for Direct Purchase