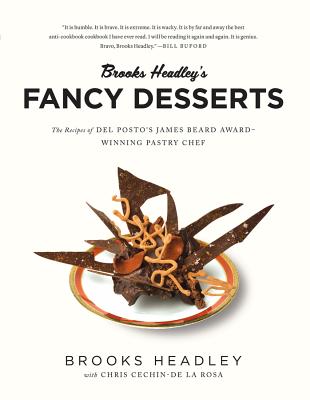 “The most entertaining cookbook in memory. . . . A game changer.”—Anthony Bourdain

While other chefs paid dues on restaurant lines and at cooking schools, Brooks Headley was in the back of a tour van as a drummer in much-loved punk bands that never made a dime. Now executive pastry chef at New York's Del Posto restaurant, Headley creates unorthodox recipes that echo his unconventional background: fruit is king, vegetables are championed, acidity is key, and simplicity is the goal.

A cupcake primer this is not. The punk rocker
turned pastry chef at NYC’s Del Posto has delivered a
hilarious page-turner.
— Bon Appétit

This is one you’ll want to read cover-to-cover.
— Eater

It is humble. It is brave. It is extreme. It is wacky. It
is by far and away the best anti-cookbook cookbook
I have ever read. I will be reading it again and again.
It is genius. Bravo, Brooks Headley!
— Bill Buford - Food52

A visceral and attitudinal and gustatory joy-ride, an exhilarating few laps around a 4 star kitchen in a beat up obscure punk rocker’s tour van. And Brooks Headley is as devoted to the sweet joy as he is to the hard ride of excellence in the pastry kitchen.
— Gabrielle Hamilton

Brooks Headley, chef-owner of Superiority Burger, was named best pastry chef in the country in 2013 by the James Beard Foundation. His previous cookbook, Brooks Headley's Fancy Desserts, won the Piglet Tournament of Cookbooks from Food52. He lives in New York City.
Loading...
or
Not Currently Available for Direct Purchase