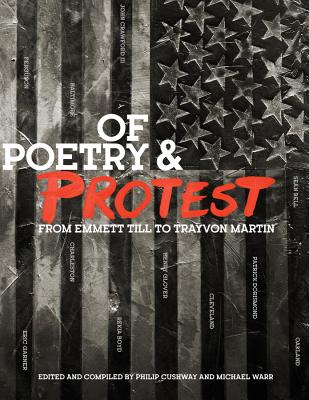 Of Poetry and Protest

From Emmett Till to Trayvon Martin

This stunning work illuminates today’s black experience through the voices of our most transformative and powerful African American poets.

Included in this extraordinary volume are the poems of 43 of America’s most talented African American wordsmiths, including Pulitzer Prize–winning poets Rita Dove, Natasha Tretheway, Yusef Komunyakaa, and Tracy K. Smith, as well as the work of other luminaries such as Elizabeth Alexander, Ishmael Reed, and Sonia Sanchez. Included are poems such as “No Wound of Exit” by Patricia Smith, “We Are Not Responsible” by Harryette Mullen, and “Poem for My Father” by Quincy Troupe. Each is accompanied by a photograph of the poet along with a first-person biography. The anthology also contains personal essays on race such as “The Talk” by Jeannine Amber and works by Harry Belafonte, Amiri Baraka, and The Reverend Dr. William Barber II, architect of the Moral Mondays movement, as well as images and iconic political posters of the Black Lives Matter movement, Malcolm X, and the Black Panther Party. Taken together, Of Poetry and Protest gives voice to the current conversation about race in America while also providing historical and cultural context. It serves as an excellent introduction to African American poetry and is a must-have for every reader committed to social justice and racial harmony.

Philip Cushway who conceived Of Poetry and Protest, grew up on the Near North side of Chicago in the early 1960’s in the shadow of the Cabrini-Green Apartments--one of Chicago's most dangerous public housing projects. He saw his first murder at the age of 7 years while walking to school. This experience had a profound effect on him and shaped his view of society as a whole and specifically on the social injustice which plague America's inner cities. As a young adult, he became involved in local Chicago politics, the Anti-Vietnam war movement and the civil-rights movement. When he moved to California in the 1980’s, he purchased one of the largest collections of rare 1960's and 1970's political art and memorabilia which include posters from the Black Panther party and the Students for a Democratic Society. Several examples of this art appear in Of Poetry and Protest: From Emmett Till to Trayvon Martin. He is a fine arts publisher and collector who lives in San Francisco.

Victoria Smith captured the intimate portraits of the poets in Of Poetry and Protest and is a world-wide freelance photographer based in San Francisco. Her photos have appeared in Rolling Stone, Q, Filter, Guitar World and many other publications.

Michael Warr received a Creative Work Fund award for “Tracing Poetic Memory.” He is deputy director of the Museum of the African Diaspora in San Francisco.
Loading...
or support indie stores by buying on