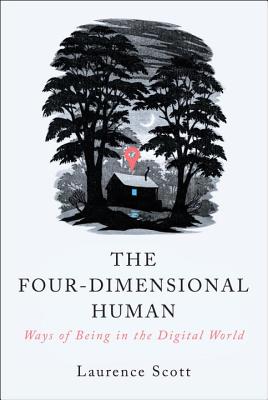 Ways of Being in the Digital World

You are a four-dimensional human.

Each of us exists in three-dimensional, physical space. But, as a constellation of everyday digital phenomena rewires our lives, we are increasingly coaxed from the containment of our predigital selves into a wonderful and eerie fourth dimension, a world of ceaseless communication, instant information, and global connection.

Our portals to this new world have been wedged open, and the silhouette of a figure is slowly taking shape. But what does it feel like to be four-dimensional? How do digital technologies influence the rhythms of our thoughts, the style and tilt of our consciousness? What new sensitivities and sensibilities are emerging with our exposure to the delights, sorrows, and anxieties of a networked world? And how do we live in public with these recoded private lives?

Laurence Scott—hailed as a "New Generation Thinker" by the Arts and Humanities Research Council and the BBC—shows how this four-dimensional life is dramatically changing us by redefining our social lives and extending the limits of our presence in the world. Blending tech-philosophy with insights on everything from Seinfeld to the fall of Gaddafi, Scott stands with a rising generation of social critics hoping to understand our new reality. His virtuosic debut is a revelatory and original exploration of life in the digital age.

Praise For The Four-Dimensional Human: Ways of Being in the Digital World…

Clever, allusive, with a capacious sense of humor, the book sizzles with intelligence.…it’s hard not to be charmed.
— Jacob Silverman

With his joyful phrase-making and sharp eye for the follies and absurdities of wired life, Scott would be the perfect investigator to report back on what it feels like to be…uploaded.
— Will Self

A probing and elegant meditation on the digital world’s ‘ways of being.’ Beyond the lovely precision of its diction and companionable voice, it is notable for its courage to write from inside the ambiguities and confusions of online life, to resist the easy pleasures of summary judgement.

Adds immeasurably to the burgeoning literature on what social media do to our innermost lives, relationships, and stance towards the world. [Scott] doesn’t travel on main roads—the familiar worries about technology—but rather on hidden byways marked by imagination and metaphor, where data cannot follow.
— Carol Tavris

[The Four-Dimensional Human] is carefully crafted and eloquently written…A valuable book that brings a fresh perspective to the topic of life online and offline.

[A] rich phenomenology of living in the digital age and its radical reshaping of fundamental human experiences...Scott’s sharp eye for irony and great wit make this debut a lively contribution to the conversation about the effects of the Internet on society.

Laurence Scott’s essays and criticism have appeared on NewYorker.com and in the Guardian, the Financial Times, and the London Review of Books, among other publications. He is a lecturer in writing at New York University in London and lives in London.
Loading...
or
Not Currently Available for Direct Purchase