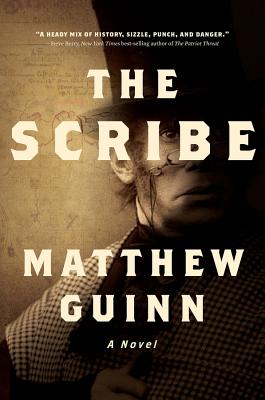 Detectives Canby and Underwood hunt down a serial killer in this “heady mix of history, sizzle, punch, and danger” (Steve Berry, New York Times best-selling author of The Patriot Threat).

Disgraced former detective and Civil War veteran Thomas Canby partners with Atlanta’s first African American police officer, Cyrus Underwood, to track down a serial murderer who seems to be targeting the city’s wealthiest black entrepreneurs. Even after the killer is revealed, his astonishing ability to elude capture raises the question: is there such a thing as supernatural evil at loose in the world? Matthew Guinn draws readers into a vortex of tense, atmospheric storytelling, confronting the fears of both old South and new, compelling the reader through a breathless, disturbing finale.

A Los Angeles Public Library Best Book of the Year and a Finalist for the Pat Conroy Southern Book Prize.


Praise For The Scribe: A Novel…

A gripping tale that will have readers gasping, both in suspense and in horror…. [Guinn is] one of the most promising fiction writers in America today.
— Jim Ewing - The Clarion-Ledger

One of the most tense and exciting novels I have read in ages.
— Don Noble - Tuscaloosa News

So good…Historical figures mingle freely with Guinn’s own fully fleshed characters in a time and setting that make this horror story something much more than just scary reading at dusk.
— Laura Wadley - Daily Herald

Matthew Guinn is the real thing…Do yourself a favor and read this.
— Greg Iles, New York Times best-selling author of Natchez Burning

The Scribe creates a nightmare, penetrates the darkness, and balances ever so nimbly between the surreal and the physical worlds. Yet there is hope, always hope, and you’ll follow that light at the end of the tunnel to see where Guinn will take you.

Guinn has written an excellent sequel to the first novel…in his series of mysteries set in the Reconstruction South. The author superbly portrays the evil that lurks along the streets of post-war Atlanta. His research of Atlanta after the war is impeccable, and the plot, with its twists and turns, is fast-paced, gripping, and compels the reader to turn each page. I highly recommend this mystery.
— Jeff Westerhoff - Historical Novel Society

Few writers seem to understand the difficult balance between historical detail and suspense better than Edgar Award finalist Matthew Guinn. [The Scribe] is a master class in historical mystery…. A powerful, elaborate page-turner, perfect for fans of everything from Caleb Carr’s The Alienist to Cormac McCarthy’s Blood Meridian.

Matthew Guinn's first novel, The Resurrectionist, was a finalist for the Edgar Award. A native Atlantan, he now lives with his family in Jackson, Mississippi.
Loading...
or support indie stores by buying on