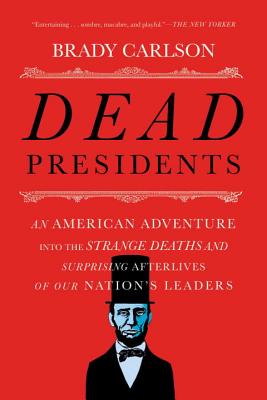 "Entertaining…Carlson shifts deftly among sombre, macabre, and playful stories and shows how the death-tourism industry reveals more than amusing trivia." —The New Yorker

In Dead Presidents, public radio host and reporter Brady Carlson takes readers on an epic trip to presidential gravesites, monuments, and memorials from sea to shining sea. With an engaging mix of history and contemporary reporting, Carlson explores the death stories of our greatest leaders, and shows that the ways we memorialize our presidents reveal as much about us as they do about the men themselves.

Praise For Dead Presidents: An American Adventure into the Strange Deaths and Surprising Afterlives of Our Nation's Leaders…

Brady is an exuberant guide to presidential wishes, myths, and monuments, both official and forgotten, and what dead presidents reveal about ourselves, our history, and how we imagine our past and the future.
— Virginia Prescott - New Hampshire Public Radio

Brady Carlson is a reporter and the on-air host of NPR’s Weekend Edition for New Hampshire Public Radio. He lives in New Hampshire with his wife and children.
Loading...
or support indie stores by buying on