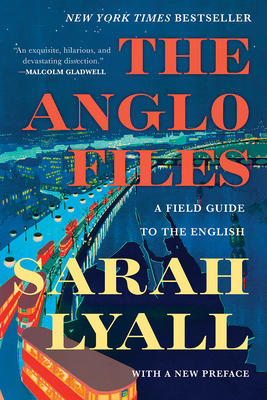 A Field Guide to the English

Why do the English keep apologizing? Why are they so unenthusiastic about enthusiasm? Why does rain surprise them? When are they being ironic, and how can you tell? Even after eighteen years in London, New York Times reporter Sarah Lyall remained perplexed and intrigued by its curious inhabitants and their curious customs. She’s since returned to the United States, but this distillation of incisive—and irreverent—insights, now updated with a new preface, is just as illuminating today. And perhaps even more so, in the wake of Brexit and the attendant national identity crisis.

While there may be no easy answer to the question of how, exactly, to understand the English, The Anglo Files—part anthropological field study, part memoir—helps point the way.


Praise For The Anglo Files: A Field Guide to the English…

Lyall is a first-rate reporter, and her book has all the hallmarks of her journalism: it is warm, blunt, confessional, companionable.… [She] is at her tart, observant best.
— Matt Weiland - New York Times Book Review

Because Lyall is rather witty and understated herself, as well as a dogged, meticulous reporter, the result is a book that is both funny and illuminating.
— Laurie Hertzel - Minneapolis Star Tribune

Sarah Lyall is the wittiest observer of the English and their curious habits. Now she’s written a book that takes her game to an entirely new level. It’s funny, it’s delightful and anyone with even a passing interest in these strange people should read it.
— Michael Lewis

By turns wry, mordant, affectionate, bitter and sweet. I never miss any of Sarah Lyall’s dispatches because, while they manage to remind me why I left, they also contrive to make me feel occasionally homesick.
— Christopher Hitchens

Sarah Lyall brings all the virtues of the best American journalism, including accuracy, to the task of analysing all the vices of British society, including hypocrisy, venality and hopeless confusion about sex. In addition to its importance as a sociological treatise, The Anglo Files is an indispensable guide to all the best true stories about the country to which she has emigrated, and in which she will now be hailed as one of its supreme analysts, preparatory to her being executed on Tower Green.

An entertaining, indeed delightful, book. If the exchange rate makes going there impossible, read this. It’s cheaper and almost as much fun.
— Jeff Simon - Buffalo News

A superb social and cultural anthropology by a reporter who has lived among her subjects without losing her sense of wonder for them. It is beautifully written, always insightful, and often hilarious. Imagine Margaret Mead channeling Jon Stewart and you have Sarah Lyall.
— Eric Lax