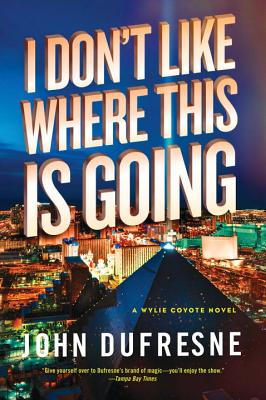 “If Raymond Chandler were reincarnated as a novelist in south Florida, he couldn’t nail it any better than John Dufresne.”—Carl Hiaasen

John Dufresne has been hailed by the New York Times as “an original talent . . . [whose] humor is frightfully dark, but . . . dazzling.” I Don’t Like Where This Is Going continues the misadventures of therapist-on-the-run Wylie “Coyote” Melville. Wylie has witnessed a woman falling to her death outside the Luxor Hotel. Troubled by the ensuing cover-up, he becomes a man on a mission, enlisting the help of his old friend, an ace card player and master magician, to help find answers. The duo’s escapades range from poker tables to desert highways, from bordellos to child beauty pageants, resulting in a thoroughly satisfying and hilarious whodunit.

Praise For I Don't Like Where This Is Going: A Wylie Coyote Novel…

I can promise that you won’t read another novel this year (or any year) that includes a rocket launcher attack on a brothel and a parade of somber Kafkas lining a Vegas strip. Really, you don’t want to miss this one.
— Ed Falco

The mystery hooks you, and the dialogue, quick and jazzy and funny as Elmore Leonard, keeps the line taut. John Dufresne is one of America’s finest writers, and there doesn’t seem to be anything he can’t do.
— James Magnuson

This crime-noir book is like nothing you’ve ever read—an existential mystery story about exploitation and indifference, about illusion and hope.
— Debra Monroe

Wylie Melville’s odyssey through Las Vegas is a funny, quirky trip that will keep you reading. The title says it all.
— James O. Born

What has happened in Vegas has not stayed in Vegas at all, but has instead wound up in John Dufresne’s brilliant new send-up of the crime thriller, I Don’t Like Where This Is Going. So the title says, dear reader, but you are going to like where this book goes, a lot.

Happiness is a new Wylie Coyote novel! I laughed and shuddered in equal measure, but I also drooled as Wylie eats his way through the story. Fitting then to quote Anthony Bourdain, who said of Vegas: ‘See the full spectrum of human folly and commit some follies of your own.’ The same is true of this delightful novel.
— Ann Hood

Nothing is more fun than reading a John Dufresne novel, and I couldn’t be more pleased that he’s turned his brilliant mind to crime. This book deserves its comparisons to Chandler and MacDonald, but it finds a lot more gallows humor in Wylie Coyote’s violent, darkly fascinating world. Highly entertaining. You won’t put it down till you’re done, and then you’ll want more.
— Brad Watson
or
Not Currently Available for Direct Purchase
Copyright © 2020 American Booksellers Association