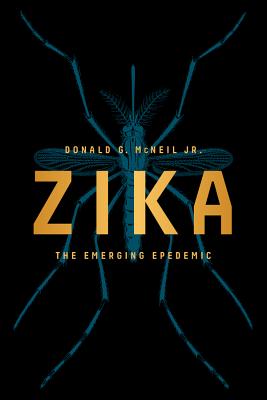 A gripping narrative about the origins and spread of the Zika virus by New York Times science reporter Donald G. McNeil Jr.

Until recently, Zika—once considered a mild disease—was hardly a cause for global panic. But as early as August 2015, doctors in northeast Brazil began to notice a trend: many mothers who had recently experienced symptoms of the Zika virus were giving birth to babies with microcephaly, a serious disorder characterized by unusually small heads and brain damage.

By early 2016, Zika was making headlines as evidence mounted—and eventually confirmed—that microcephaly is caused by the virus, which can be contracted through mosquito bites or sexually transmitted.

The first death on American soil, in February 2016, was confirmed in Puerto Rico in April. The first case of microcephaly in Puerto Rico was confirmed on May 13, 2016. The virus has been known to be transmitted by the Aedes aegypti or Yellow Fever mosquito, but now Aedes albopictus, the Asian Tiger mosquito, has been found to carry it as well, which means it might affect regions as far north as New England and the Great Lakes. Right now, at least 298 million people in the Americas live in areas “conducive to Zika transmission,” according to a recent study. Over the next year, more than 5 million babies will be born.

In Zika: The Emerging Epidemic, Donald G. McNeil Jr. sets the facts straight in a fascinating exploration of Zika’s origins, how it’s spreading, the race for a cure, and what we can do to protect ourselves now.

Donald G. McNeil Jr. is a science reporter covering plagues and pestilences for The New York Times, where he began work as a copy boy in 1976. He is a former Africa correspondent and has reported from fifty-five countries.

Praise For Zika: The Emerging Epidemic…

I find much to applaud in Mr. McNeil’s Zika: The Emerging Epidemic. Though slim…Zika is dense with information…. In a no-nonsense, declarative writing style, Mr. McNeil tells the history of humanity’s relationship with the Zika virus.

[An] agile account….McNeil’s mapping of official responses to the epidemic…underlines the burning need for viral vigilance.

Lucid, even prescient....Years from now, wherever we stand in the struggle, many of us will still be reading and sharing McNeil’s real-time account of Zika’s stunning assault on an unprepared planet. Yes, the book is really that good.
— Dr. Claire Panosian Dunavan

A succinct summary of Zika to date....from a reliable source.
or support indie stores by buying on
(This book is on backorder)
Copyright © 2020 American Booksellers Association