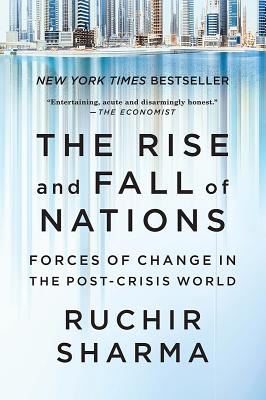 The Rise and Fall of Nations

Forces of Change in the Post-Crisis World

"Quite simply the best guide to the global economy today." —Fareed Zakaria

Shaped by his twenty-five years traveling the world, and enlivened by encounters with villagers from Rio to Beijing, tycoons, and presidents, Ruchir Sharma’s The Rise and Fall of Nations rethinks the "dismal science" of economics as a practical art. Narrowing the thousands of factors that can shape a country’s fortunes to ten clear rules, Sharma explains how to spot political, economic, and social changes in real time. He shows how to read political headlines, black markets, the price of onions, and billionaire rankings as signals of booms, busts, and protests. Set in a post-crisis age that has turned the world upside down, replacing fast growth with slow growth and political calm with revolt, Sharma’s pioneering book is an entertaining field guide to understanding change in this era or any era.

Praise For The Rise and Fall of Nations: Forces of Change in the Post-Crisis World…

For insights into the forces operating in our world today, The Rise and Fall of Nations is a stimulating and useful guide.

Filled with amazing data. . . fascinating insights and revealing anecdotes, this is quite simply the best guide to the global economy today. Whether you are an observer or an investor, you cannot afford to ignore it.
— Fareed Zakaria

In this lively and informative book, Sharma explains his system of 10 rules for identifying economies with good potential. Among the striking conclusions is his bearishness about China, largely because of its huge and growing indebtedness.
— Martin Wolf - Financial Times

What determines whether countries succeed or fail? That’s the big question Ruchir Sharma sets out to answer in The Rise and Fall of Nations. . . . Sharma’s mission is as ambitious as it is well-executed. A mix of humble pragmatism and daring decisiveness make his tips compelling and credible. . . . The author backs up each of the rules with a combination of hard facts and colourful anecdotes gathered on his travels. . . . Sharma’s tried and tested tenets and eloquent delivery will reward anyone hoping to understand what determines the fickle fortunes of nations.

Entertaining, acute and disarmingly honest. . . . [Sharma] has a knack for sharp comparisons between countries. Australia’s history of high immigration is contrasted with Japan’s insularity. . . . He is pithy, too. In countries with rotten financial systems, ‘a shake-up of banking is a shake-up of society.’ . . . Mr. Sharma’s book is a fine guide to the great emerging market boom and bust.
— The Economist

Compelling. . . a success. . . . The local insight adds color, while the data reassures us that his analysis is underpinned by more than a series of conversations with taxi drivers. . . . Much more than an investment primer. The issues he deals with, from growth to inequality, are of much broader interest. . . . This does not necessarily mean he will be right —but it does mean his projections are more easily testable. . . . Sharma’s book provides a good guide for working out what will come next.
— Duncan Weldon - Prospect magazine

A vital guide to the new economic order. . . . Sharma has been one of the prescient seers of the Chinese debt crisis.
— Rana Foroohar - Time Magazine

If you have been wondering what’s happening to the world—why for example has England voted to commit economic suicide by leaving the European Union?. . . . The Americans have voted for Donald Trump. . . Donald Trump? What’s going on? Is there a rightwing, anti-immigrant backlash, or is it more complex? In fact much of what is happening is following a pattern, a pattern of global trends that this book has in great detail and mastery documented. . . . An amazing read, I learned a lot from it, and its out-of-the-box thinking.
— Prannoy Roy, Indian TV news anchor and executive co-chair of NDTV group

Articulate. . . Highly recommended to all readers interested in global economics. Sharma offers ten rules in evaluating global economic growth since the 2008 financial crisis. . . . Sharma presents a wealth of data and insights into the economic condition of the post-2008 world. . . . Some of his conclusions may seem jarring but are always thought provoking, such as that past population control measures are now causing labor shortages and that economic forecasting beyond five years is rarely accurate.
— Library Journal

[Sharma] writes interestingly and well. . . . The book is rich in example and anecdote. . . . And it may just help you avoid picking losers.
— David Smith - The Times (UK)

The book is so lively and wandering that it is possible to miss the 10 rules and enjoy it just as a record of Sharma’s learning them.
— The Indian Express

How do you write a compelling book about which nations will rise and fall over the next five years? Probably not by suggesting that it’s mostly random, except for extreme policy mistakes. True, Ruchir Sharma, head of emerging markets at Morgan Stanley, offers much more than that in The Rise and Fall of Nations. He recounts his exhaustive global travel that has him meeting with Vladimir Putin on one page and listening to George W. Bush analyzing Vladimir Putin on the next, and he describes his massive research effort aimed at spotting “ten clear rules” to follow based on a huge database of many nations and many decades

The most interesting question of all time is why countries are poor. . . . The Rise and Fall of Nations is a wonderful attempt to answer that question by asking 10 questions. . . . This book is a wonderful way to travel the world, understand the issues countries should care about.