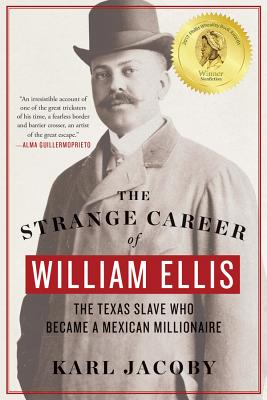 "An American 'Odyssey,' the larger-than-life story of a man who travels far in the wake of war and gets by on his adaptability and gift for gab." —Wall Street Journal

A black child born on the US-Mexico border in the twilight of slavery, William Ellis inhabited a world divided along ambiguous racial lines. Adopting the name Guillermo Eliseo, he passed as Mexican, transcending racial lines to become fabulously wealthy as a Wall Street banker, diplomat, and owner of scores of mines and haciendas south of the border. In The Strange Career of William Ellis, prize-winning historian Karl Jacoby weaves an astonishing tale of cunning and scandal, offering fresh insights on the history of the Reconstruction era, the US-Mexico border, and the abiding riddle of race in America.

Praise For The Strange Career of William Ellis: The Texas Slave Who Became a Mexican Millionaire…

[Jacoby] presents Ellis’ intriguing story…Equally intriguing is the history of the post–Civil War Texas-Mexican borderland. Jacoby’s book may well have you searching his bibliography for books on that subject.
— St. Louis Post-Dispatch

A work of admirable sleuthing…Jacoby has assembled a portrait of a man who deliberately sought to cover his own tracks.
— The Nation

An irresistible account of one of the great tricksters of his time, a fearless border and barrier-crosser, an artist of the great escape.
— Alma Guillermoprieto

A masterpiece of border history. Jacoby has a biographer’s eye for detail and a detective’s talent for discovery, which he deftly uses to construct both the inner emotional life and larger social world of his subject. At once a history of the United States and of Mexico, Strange Career offers a truly transnational history of late nineteenth- and early twentieth-century North America. Today, as borders are simultaneously being dissolved and hardened, Jacoby’s study of Ellis’s exceptional career is as timely as it is compelling.

— Greg Grandin, author of Empire of Necessity and Fordlandia

William Ellis was a chameleon, a trickster, and a man determined to shape his own identity. With enormous skill, Karl Jacoby uncovers this tremendous subject, revealing Ellis’s lies, and crafting a powerful new narrative about the porous borders of class, race, and national identity in late nineteenth- and early twentieth-century American life. Deftly moving between the improbable details of Ellis’s biography and the larger political and cultural stories of the day, Jacoby demonstrates how one man’s life can help us understand the past in an entirely new way.
— Martha A. Sandweiss, professor of history, Princeton University, and author of Passing Strange: A Gilded Age Tale of Love and Deception Across the Color Line

Like all of his remarkable scholarship, Karl Jacoby’s The Strange Career of William Ellis takes an unexpected or little-known subject and, with great insight and imagination, uses it to shed new light on our larger past. He has excavated a life that began in obscurity and was ever being reinvented, and, in so doing, offers a deep understanding of the shifting boundaries of place, race, and social standing. An extraordinary story told with extraordinary skill.

— Steven Hahn, Pulitzer Prize–winning author of A Nation under Our Feet

Karl Jacoby is a professor of history at Columbia University. The author of two previous books, he has won the Albert J. Beveridge Award and a Guggenheim Fellowship, among many other honors. He lives in New York.
Loading...
or support indie stores by buying on
(This book is on backorder)