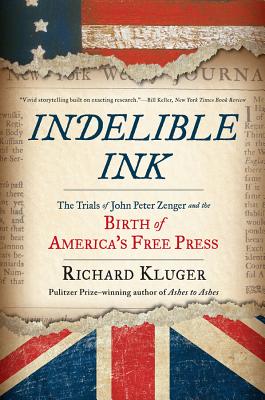 In 1735, struggling printer John Peter Zenger scandalized colonial New York by launching a small newspaper, the New-York Weekly Journal. The newspaper was assailed by the new British governor as corrupt and arrogant, and as being a direct challenge against the prevailing law that criminalized any criticism of the royal government. Zenger was thrown in jail for nine months before his landmark one-day trial on August 4, 1735, in which he was brilliantly defended by Andrew Hamilton. In Indelible Ink, Pulitzer Prize–winning social historian Richard Kluger has fashioned the first book-length narrative of the Zenger case, rendering with colorful detail its setting in old New York and the vibrant personalities of its leading participants, whose virtues and shortcomings are assessed with fresh scrutiny often at variance with earlier accounts.

Praise For Indelible Ink: The Trials of John Peter Zenger and the Birth of America's Free Press…

Beneath WikiLeaks and Edward Snowden, beneath the whole modern concept of a free press, lies the trial of a German-American printer in colonial New York. Richard Kluger’s account of the Zenger trial is thoughtful, scrupulously detailed, and utterly relevant.
— Russell Shorto, author of Revolution Song

Indelible Ink is a triumph…a new and very compelling take on the Zenger case. I found myself glued to Kluger’s book and much in agreement with his findings, and he has written it all wonderfully well.

We’ve heard of the Salem witch trials. This is the trial from the 1700s you have not heard about. Mega-trial. Think Hamilton meets John Grisham. We have a 1st amendment and we got into the American Revolution because of the explosive things that happened in this book.
— Brad Thor - The Today Show

Thoroughly engaging…packed with drama…[I]t stands as a cautionary tale of what might happen if we let history repeat itself.
— Amy Brady - Los Angeles Review of Books

Richard Kluger won the Pulitzer Prize for Ashes to Ashes, a searing history of the cigarette industry, and was a two-time National Book Award finalist (for Simple Justice and The Paper). He lives in Berkeley, California.
Loading...
or
Not Currently Available for Direct Purchase