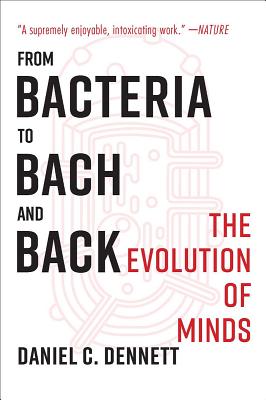 From Bacteria to Bach and Back

The Evolution of Minds

How did we come to have minds? For centuries, poets, philosophers, psychologists, and physicists have wondered how the human mind developed its unrivaled abilities. Disciples of Darwin have explained how natural selection produced plants, but what about the human mind?

In From Bacteria to Bach and Back, Daniel C. Dennett builds on recent discoveries from biology and computer science to show, step by step, how a comprehending mind could in fact have arisen from a mindless process of natural selection. A crucial shift occurred when humans developed the ability to share memes, or ways of doing things not based in genetic instinct. Competition among memes produced thinking tools powerful enough that our minds don’t just perceive and react, they create and comprehend.

An agenda-setting book for a new generation of philosophers and scientists, From Bacteria to Bach and Back will delight and entertain all those curious about how the mind works.

Praise For From Bacteria to Bach and Back: The Evolution of Minds…

[The] best scientific-philosophical approach to understanding how consciousness evolved…A wonderful book that will shape and drive thinking for years to come.
— Shane O’Mara - Times Higher Education

This is a book to read and relish and then read again.
— Michael S. Gazzaniga - Wall Street Journal

Readers will find their minds enriched with many powerful thinking tools.
— Economist

If you have not encountered [Dennett’s] work, you surely should…very few contemporary thinkers have supplied us with so many ‘thinking tools.’…Dennett’s book is astonishingly rich and will introduce you to most of the key ideas in the terrain he strides energetically across.
— Adam Zeman - Standpoint

Encyclopedic knowledge of both the history of and the latest thinking in philosophy, evolutionary biology, psychology, and computer science.
— Christopher Beha - Harper's

Daniel C. Dennett is University Professor and Austin B. Fletcher Professor of Philosophy at Tufts University and the author of numerous books including Intuition Pumps and Other Tools for Thinking, Breaking the Spell, Darwin’s Dangerous Idea, and Consciousness Explained.
Loading...
or support indie stores by buying on