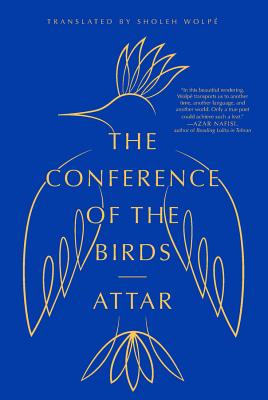 The Conference of the Birds

“These lofty words are an antidote

for anyone sickened by extremism's poison.”

Considered by Rumi to be “the master” of Sufi mystic poetry, Attar is best known for this epic poem, a magnificent allegorical tale about the soul’s search for meaning. He recounts the perilous journey of the world’s birds to the faraway peaks of Mount Qaf in search of the mysterious Simorgh, their king. Attar’s beguiling anecdotes and humor intermingle the sublime with the mundane, the spiritual with the worldly, while his poem models the soul’s escape from the mind’s rational embrace.

Sholeh Wolpé re-creates for modern readers the beauty and timeless wisdom of the original Persian, in contemporary English verse and poetic prose.

Praise For The Conference of the Birds…

Wolpé’s translation of this epic is sure to be as timeless as the masterpiece itself.
— Reza Aslan, author of Zealot

What Sholeh Wolpé has done exceedingly well is to bring this medieval poem over into lively, contemporary English that feels absolutely right and not at all forced.
— Edith Grossman, author of Why Translation Matters

In this beautiful rendering of Attar’s Conference of the Birds, Sholeh Wolpé, herself a passionate poet, transports us to another time, another language & another world, while reminding us of how enduring and universal great works of imagination are, how they create spaces within which we not only acknowledge and appreciate our differences but also recognize and celebrate our shared humanity. Only a true poet could achieve such a feat.

In Sholeh Wolpé’s version, this sly, knowing Sufi classic will surprise and delight a new generation of readers.
— Jack Miles, general editor of The Norton Anthology of World Religions

As close to the original as a reader can come in translation, and imbued with the same kind of revelation, it makes clear why Attar remained such a strong influence on Rumi. The reader travels, along with the poet’s birds, to greater spiritual insight through transcendent verse.
— Roger Sedarat, Queens College

Sholeh Wolpé’s stunning new translation—the first in over 30 years—renders Attar’s engaging, singular voice with wit and flourish.… Most importantly, Wolpé offers Attar’s masterwork not as a curiosity from a bygone age, but as a text of living wisdom whose message is always timely.
— Literary Hub

Sholeh Wolpé is an Iranian-American poet and writer. The author of more than ten books of poems, translations, and anthologies, she is the recipient of a PEN/Heim grant, the Midwest Book Award, and the Lois Roth Persian Translation prize, among others. Wolpé lives in Los Angeles.
Loading...
or support indie stores by buying on