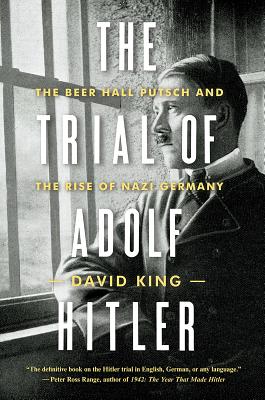 The Trial of Adolf Hitler

The Beer Hall Putsch and the Rise of Nazi Germany

“Gripping… a disturbing portrait of how an advanced country can descend into chaos.” —Frederick Taylor, Wall Street Journal

The Trial of Adolf Hitler tells the true story of the monumental criminal proceeding that thrust Hitler into the limelight after the failed beer hall putsch, provided him with an unprecedented stage for his demagoguery, and set him on his improbable path to power. Reporters from as far away as Argentina and Australia flocked to Munich for the sensational, four-week spectacle. By the end, Hitler would transform a fiasco into a stunning victory for the fledgling Nazi Party. The first book in English on the subject, The Trial of Adolf Hitler draws on never-before-published sources to re-create in riveting detail a haunting failure of justice with catastrophic consequences.


Praise For The Trial of Adolf Hitler: The Beer Hall Putsch and the Rise of Nazi Germany…

Engrossing and well-researched… makes an important contribution to the understanding of modern totalitarianism.
— Christian Science Monitor

A courtroom drama both farcical and ominous. An absorbing, detailed account of a crucial—but often overlooked—chapter in Hitler’s rise.
— Joseph Kanon, author of The Good German and Leaving Berlin

A gripping, almost minute-by-minute narrative… The Trial of Adolf Hitler is impeccably researched and engagingly written, and succeeds in bringing the fraught, chaotic nature of the event to life.

Vivid… offer[s] startling insights into aspects of Hitler and Nazism that have been previously under-reported.
— Nigel Jones - The Spectator

As captivating as it is well researched and scholastically precise.
— The New Criterion

The casual student of history might think that we already know all we usefully can about Adolf Hitler, his rise and fall, but… here is another contribution to Führer studies.
— Robin Aitken - The Catholic Herald

The early criminal trial that could have stopped Hitler’s rise… New York Times best-selling author King brings that early trial vividly to life. He shows in this deeply insightful, compellingly written narrative how Hitler turned an early legal setback into a platform for his vicious demagoguery—and a short prison sentence into a political launching pad.

King's research is exquisite.… It is difficult to think of a book accessible to the general public like this that presents such a rich and detailed work of unpublished research.
— Joel Pinheiro da Fonseca - Exame (Brazil)

This sobering book reveals what happened, what went wrong, and how it paved the way for the cataclysms that were to follow.
— History Revealed

David King is the New York Times best-selling author of Death in the City of Light, Vienna 1814, and The Trial of Adolf Hitler. He taught European history at the University of Kentucky, and lives in Lexington, Kentucky.
Loading...
or support indie stores by buying on