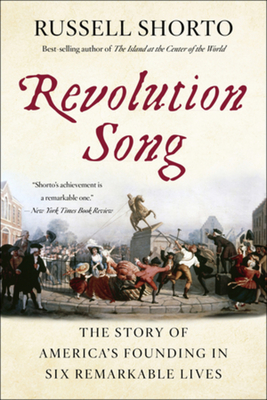 The Story of America's Founding in Six Remarkable Lives

At a time when America’s founding principles are being debated as never before, Russell Shorto looks back to the era in which those principles were forged. In Revolution Song, Shorto weaves the lives of six people into a seamless narrative that casts fresh light on the range of experience in colonial America on the cusp of revolution. The result is a brilliant defense of American values with a compelling message: the American Revolution is still being fought today, and its ideals are worth defending.

Praise For Revolution Song: The Story of America's Founding in Six Remarkable Lives…

Russell Shorto’s engaging new book appears at a moment when basic concepts of rights and equality are routinely disparaged. As if in response to our troubled political culture, he invites readers to return to the American Revolution to understand better how an 18th-century commitment to freedom took root and became a fundamental, unifying value in our nation’s history.
— T. H. Breen - American Scholar

The intertwined stories of Revolution Song give a sense of how far-reaching a phenomenon the War of Independence was. It leaves to readers the pleasure of judging what each of the figures in the book—or perhaps the combination of them all—contributed to an event that changed the world.

We as Native Americans tend to relay our history in story form. The people become real in our minds and the stories vivid and compelling. Shorto has succeeded in telling this tale as a master Native storyteller would. He weaves the complex strands of time together wonderfully as if I were hearing them in the warm firelight of a bark longhouse.
— Michael Galban, curator, Seneca Art & Culture Center, Ganondagan State Historic Site

Timely and engaging.… [Shorto] explores the philosophical currents of the revolutionary era through an unusual assemblage of life stories.… Their experiences make for a compelling narrative, rich in unexpected twists, turns, and parallels, that allows Shorto to explore how engagement with revolutionary ideals reflected social and economic class, gender, region, race, culture, and political allegiance.
— Booklist (starred review)

[Shorto’s] attention to everyday detail anchors his portraits and helps reveal the precariousness of freedom in an unequal, rapidly changing society.
— Publishers Weekly

How did the teenaged daughter of a British officer view the American Revolution, from behind enemy lines in New York? What did that contest mean to a shrewd, contemplative Iroquois warrior? Russell Shorto has emerged from the archives with a bold, largely neglected cast. He has set them free in a rich, prismatic narrative, as intensely vivid as it is seamlessly constructed.
— Stacy Schiff, author of the #1 national bestsellers Cleopatra and The Witches: Salem, 1692

Russell Shorto has long had an astonishing talent for adjusting the focus in ways that make familiar swaths of history seem intriguingly foreign and fresh. With Revolution Song, he’s worked his magic again. Through his vigorous language, his mastery of archival sources, and the pleasing interweave of his six carefully chosen characters, Shorto has composed a powerful polyphonic story, simultaneously grand and intimate, that makes us hear (and see and feel) the tumult of our nation’s founding as never before.

— Hampton Sides, New York Times best-selling author of Blood and Thunder and In the Kingdom of Ice

Brilliant, captivating and fast-paced, Revolution Song is a wonderfully original take on the American Revolution that reads like a thriller. I couldn’t put this book down.

With symphonic sweep, cinematic detail, and compelling, superbly researched real-life characters—including an iron-willed slave, a war-weary Iroquois statesman, and an ambitious planter named George Washington—Shorto shows how our struggle for freedom began and why it remains so sadly unfinished. If Spielberg wrote history, this is how it would read.
— Howard Fineman, NBC News analyst, HuffPost editor at large, and author of The Thirteen American Arguments

Russell Shorto is the best-selling author of The Island at the Center of the World, Amsterdam, and Revolution Song, and a contributing writer at the New York Times Magazine. He lives in Cumberland, Maryland.
Loading...
or
Not Currently Available for Direct Purchase