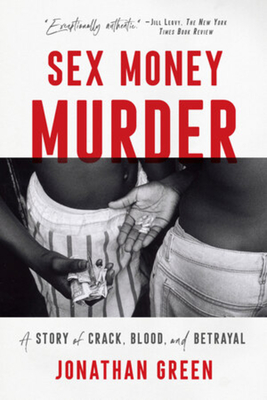 A Story of Crack, Blood, and Betrayal

Nominated for an Edgar Award

In the late 1980s and early 1990s, the Bronx had one of the country’s highest per capita homicide rates. As crack cocaine use surged, dealers claimed territory through intimidation and murder, while families were fractured by crime and incarceration. Chronicling the rise and fall of Sex Money Murder, one of the era’s most notorious gangs, reporter Jonathan Green creates a visceral and devastating portrait of a New York City borough and the dedicated detectives and prosecutors struggling to stem the tide of violence.

Drawing on years of research and extraordinary access to gang leaders, law enforcement, and federal prosecutors, Green delivers an engrossing work of gritty urban reportage. Magisterial in its scope, Sex Money Murder offers a unique perspective on the violence raging in modern-day America and the battle to end it.


Praise For Sex Money Murder: A Story of Crack, Blood, and Betrayal…

Sex Money Murder is a ferocious and long overdue piece of true storytelling about a time and a place that saw the worst of the dope business. Within it are remarkable tales of faith in a standard, friendship or what passes for it, greed, decay, the worst and the best of America.

Expertly reported and written in a crisp, no nonsense style, Sex Money Murder is a glimpse into a violent criminal lifestyle rarely documented.

Gripping.… This is a fascinating, albeit dispiriting read, a searing portrait of the appalling inequalities of the American Dream gone sour, a three-act tragedy played out against a soundtrack of gangsta rap.
— The Mail on Sunday

Jonathan Green is an award-winning journalist and author. His work has appeared in The New York Times, Esquire, Men’s Journal, Garden and Gun, Fast Company, The Financial Times Magazine, and British GQ.
Loading...
or
Not Currently Available for Direct Purchase