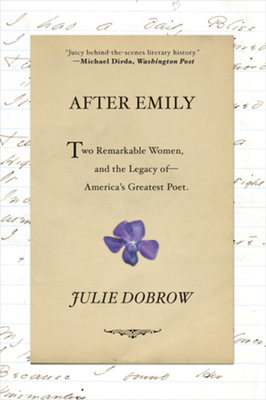 Two Remarkable Women and the Legacy of America's Greatest Poet

“Scandal and pathos abound” (The New Yorker) in this riveting account of the mother and daughter who brought Emily Dickinson’s genius to light.

Despite Emily Dickinson’s renown, the story of the two women most responsible for her initial posthumous publication—Mabel Loomis Todd and her daughter, Millicent Todd Bingham—has remained in the shadows of the archives. Utilizing hundreds of overlooked letters and diaries to weave together three unstoppable women, Julie Dobrow reveals the intrigue of Dickinson’s literary beginnings, including Mabel’s tumultuous affair with Emily’s brother, Austin Dickinson, controversial editorial decisions, and a battle over the right to define the so-called Belle of Amherst.


Praise For After Emily: Two Remarkable Women and the Legacy of America's Greatest Poet…

Long overdue.…At the end of her book, Ms. Dobrow wonders what Mabel and Millicent would think of her good work. Doubtless, they’d be very pleased.
— Brenda Wineapple - Wall Street Journal

[Dobrow] serves as a kind of fiercely clever detective in stitching together Todd’s remarkable influence and all the other little intrigues behind the marketing of Dickinson and her legacy.
— Jerome Charyn - American Scholar

Provocative.… [After Emily] aims a spotlight into a shadowy, scandal-laced corner of Amherst in the late 19th century, adding valuable, and fraught, backstory to how Dickinson’s poetry… got published and marketed.

After Emily situates the Todds in a richly documented, beautifully written, and persuasive family romance.

Elegantly and movingly told.… [Dobrow] has done an admirable job sifting through the detritus to distill the essence of these women, their work and the world they inhabited.
— Robert Weibezahl - BookPage

After Emily is an essential contribution not just to Dickinsonian scholarship but to understanding the forces of a hundred years of American history.… Dobrow’s beautiful prose is a joy to the ear, her thoughtful relationship to her subjects is delightfully captured, and the peeks throughout into the mind of Emily Dickinson are a revelation, even as her exploration of her two main characters is a valuable addition to women’s biography that will offer much to scholars and pleasure readers alike.

An elegant recovery of the two women without whom ‘Because I could not stop for Death’ likely wouldn’t be required reading for American high school students.… [A] fresh, remarkable account.
— Kirkus Reviews (starred review)

Julie Dobrow is a professor and director of the Center for Interdisciplinary Studies at Tufts University. Her writing has appeared in the Boston Globe Magazine and the Huffington Post, among others. She lives outside of Boston.
Loading...
or
Not Currently Available for Direct Purchase