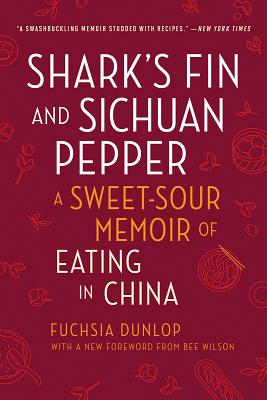 A Sweet-Sour Memoir of Eating in China

The modern classic that redefined the travel food memoir, with a new foreword from Bee Wilson.

Fuchsia Dunlop, the first Westerner to train at the prestigious Sichuan Institute of Higher Cuisine, “has done more to explain real Chinese cooking to non-Chinese cooks than anyone” (Julia Moskin, New York Times). In Shark’s Fin and Sichuan Pepper, Dunlop recalls her rapturous encounters with China’s culinary riches, alongside her brushes with corruption, environmental degradation, and greed. The resulting memoir is a vibrant portrait of Chinese culinary culture, from the remote Gansu countryside to the enchanting old city of Yangzhou. The most talked-about travel narrative when it was published a decade ago, this reissue of Shark’s Fin and Sichuan Pepper remains a thrilling adventure that you won’t be able to put down.

Fuchsia Dunlop is the author of Land of Fish and Rice, among other books. She has won four James Beard awards for her writing and lives in London.

Praise For Shark's Fin and Sichuan Pepper: A Sweet-Sour Memoir of Eating in China…

What makes it a distinguished contribution to the literature of gastronomy is its demonstration . . . that food is not a mere reflection of culture but a potent shaper of cultural identity.

After devouring Dunlop's deep dive into the techniques of Chinese cuisine, you will never look at a cleaver the same way again.
or
Buy Here
Copyright © 2020 American Booksellers Association