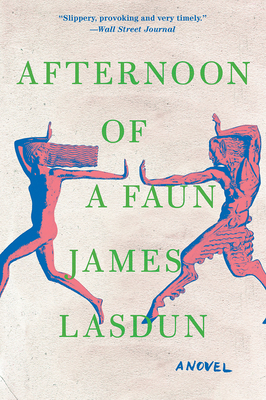 Afternoon of a Faun (Paperback)

When an old flame accuses him of sexual assault, expat English journalist Marco Rosedale is brought rapidly to the brink of ruin. Marco confides in a close friend, the unnamed narrator, who finds himself caught between the obligations of friendship and an increasingly urgent desire to uncover the truth—until the question of his own complicity becomes impossible to avoid.

James Lasdun is the author of Afternoon of a Faun, The Fall Guy, The Horned Man, Seven Lies, several poetry and short story collections, and a memoir. He lives in Brooklyn.

An instant masterpiece that brings the taut psychological precision of a Chekhov story to a hyper-modern, post-#MeToo setting.
— Johanna Thomas-Corr

[A] brilliant new novel of the #MeToo era.
— Roger Cohen

Lasdun’s writing spreads implication like condensed flavor crystals that dissolve in water. By the end of the novel, he has examined every corner of the narrator’s conflicted psyche… without once resorting to cliché.
— Katy Waldman

Afternoon of a Faun has a propulsive energy.… The denouement, when it arrives, is shocking.

Afternoon of a Faun is a highly conscientious novel, elegant in its execution and almost humble in its refusal to grandstand, or to turn a story about rape allegations into some didactic allegory.

Each time we feel that we can definitively decide where to put our sympathies, the story jostles and unbalances us with new insights.
— Marcel Theroux

James Lasdun is my favourite ‘should be famous’ writer, his work extraordinarily taut and compelling.… Lasdun expertly demonstrates how inner moral structure is often built on the scaffolding of tenuous and arbitrary rules and self-justification. The complexity of male friendship is also wryly assessed.… Enthralling.
— Leyla Sanai

Expertly orchestrated and engaging.… Of the novels to come out of the #MeToo moment to date, none is more riveting, insightful, and unsettling.
— Kirkus Reviews (starred review)

[A] thought-provoking psychological thriller.… This novel comes to a brilliantly ironic conclusion that will leave readers reeling.