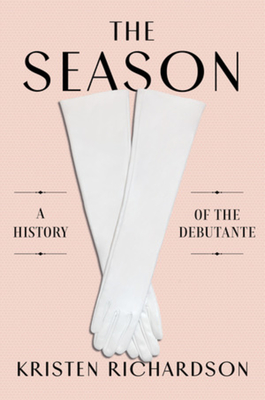 A Social History of the Debutante

A Smithsonian Best History Book of 2019

In this enthralling history of the debutante ritual, Kristen Richardson sheds new light on contemporary ideas about women and marriage.

Kristen Richardson, from a family of debutantes, chose not to debut. But as her curiosity drove her to research this enduring custom, she learned that it, and debutantes, are not as simple as they seem.

The story begins in England six hundred years ago when wealthy fathers needed an efficient way to find appropriate husbands for their daughters. Elizabeth I’s exclusive presentations at her court expanded into London’s full season of dances, dinners, and courting, extending eventually to the many corners of the British empire and beyond.

Richardson traces the social seasons of young women on both sides of the Atlantic, from Georgian England to colonial Philadelphia, from the Antebellum South and Wharton’s New York back to England, where debutante daughters of Gilded Age millionaires sought to marry British aristocrats. She delves into Jazz Age debuts, carnival balls in the American South, and the reimagined ritual of elite African American communities, which offers both social polish and academic scholarships.

The Season shares the captivating stories of these young women, often through their words from diaries, letters, and interviews that Richardson conducted at contemporary balls. The debutantes give voice to an array of complex feelings about being put on display, about the young men they meet, and about what their future in society or as wives might be.

While exploring why the debutante tradition persists—and why it has spread to Russia, China, and other nations—Richardson has uncovered its extensive cultural influence on the lives of daughters in Britain and the US and how they have come to marry.

Praise For The Season: A Social History of the Debutante…

It's an ongoing tug of war between money, race, class, culture and tradition, and The Season makes sparkling work of it.

An immersive history, and one with remarkable empathy for the women populating it.
— Maitreyi Anantharaman - Lit Hub

Richardson’s sharp account of how the season evolved…is a more absorbing story than any period drama.
— Cordelia Jenkins - Financial Times

[A] serious, enlightening look at debutantes throughout history…Richardson reveals a rich and complicated world.
— Michael Giltz - Book and Film Globe

Richardson reminds us in this engaging and thought-provoking history, the use of daughters to cement power and wealth is very hard to give up.
— BookPage

The Season is a must for readers of social history, and all will appreciate Richardson's fluid, descriptive prose.

Kristen Richardson writes so gracefully, and tells a story of courtship and marriage I knew nothing about and found fascinating.
— Ira Glass, host of This American Life

My grandmother was presented to England’s King George V and my mother was Queen of the Veiled Prophet in St. Louis, but it wasn’t until I read The Season that I understood the enduring fascination and importance of that ritual. Kristen Richardson shows us, with wit and insight, how unmarried girls in long white dresses have publicly embodied the prestige of successful families—across centuries and around the world.

— Carol Wallace, coauthor of To Marry an English Lord

Who knew being a debutante was so tough, and so fascinating? Kristen Richardson takes a deep dive into this centuries-old, highly choreographed tribal rite—presentations at court in London, ‘Ethiopian Balls’ during the American Revolution, Gilded Age Assemblies in New York, the arcane rituals of a secret society in St. Louis, bejeweled dresses more like a suit of armor, and the secret codes embedded in the movement of a fan. And pity the poor Texas girls who had to master the spine-twisting curtsy known as the ‘Texas dip.’ All this for a husband!
— Donna M. Lucey, author of Sargent’s Women: Four Lives Behind the Canvas

Class power has never been about wealth alone. As Kristen Richardson skillfully and colorfully documents, the marriage market—and the courtly ritual of the debutante—lays open a long, troubling, transatlantic history. This engaging book reminds us that ‘mock royalty’ and the trophy daughter, whether it’s Consuelo Vanderbilt in 1894 or Ivanka Trump more recently, are at the center of America’s love affair with the rich and beautiful.
— Nancy Isenberg, author of White Trash: The 400-Year Untold History of Class in America

Kristen Richardson was born in London, England, and lives with her son in Brooklyn, New York.
Loading...
or
Not Currently Available for Direct Purchase