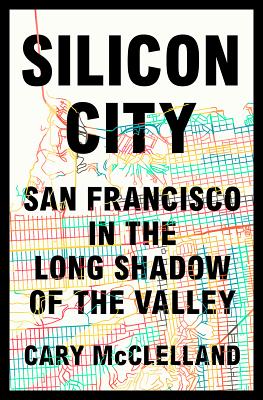 San Francisco in the Long Shadow of the Valley

An intimate, eye-opening portrait of San Francisco transformed by the tech boom.

San Francisco is changing at warp speed. Famously home to artists and activists, and known as the birthplace of the Beats, the Black Panthers, and the LGBTQ movement, in recent decades the Bay Area has been reshaped by Silicon Valley, the engine of the new American economy. The richer the region gets, the more unequal and less diverse it becomes, and cracks in the city’s facade—rapid gentrification, an epidemic of evictions, rising crime, atrophied public institutions—have started to show.

Inspired by Studs Terkel’s classic works of oral history, writer and filmmaker Cary McClelland spent several years interviewing people at the epicenter of the recent change, from venture capitalists and coders to politicians and protesters, from native sons and daughters to the city’s newest arrivals. The crisp and vivid stories of Silicon City’s diverse cast capture San Francisco as never before.

The book opens with a longtime tour guide recounting the history of the original Gold Rush and observing how little the people of his city pay attention to its history; it ends on Fisherman’s Wharf, with the proprietor of an arcade game museum reminding us that even today’s technology will become relics of the past. In between we hear from people who have passed through Apple, Google, eBay, Intel, and the other big tech companies of our time. And we meet those who are experiencing the changes at the grassroots level: a homeless advocate in Haight-Ashbury, an Oakland rapper, a pawnbroker in the Mission, a man who helped dismantle and rebuild the Bay Bridge, and a woman who runs a tattoo parlor in the Castro.

Silicon City masterfully weaves together a candid conversation across a divided community to create a dynamic portrait of a beloved city—and a cautionary tale for the entire country.


Praise For Silicon City: San Francisco in the Long Shadow of the Valley…

McClelland weaves together a narrative of a region under siege by the economic forces of tech, gentrification, and inequality…A refreshing perspective.
— Oakland Magazine

With dazzling omniscience, Silicon City delivers the voices of the people, each one sharing their own understanding of the city, like an oral history of the present…An almost poetic picture of San Francisco that proves the world isn’t as simple—or as discouraging—as it’s often made out to be.

Tales of the city for the boom time.
— Stephen Philips - San Francisco Chronicle

Silicon City should be San Francisco’s next big city-wide read. Short of that, it should be required reading for every employee of Twitter and Salesforce.com. Google and Facebook employees should climb aboard their comfy buses bound for Silicon Valley one fine sunny morning and find a copy on their seats. At the very least, McClelland should send a copy to each of the 11 members of the San Francisco Board of Supervisors.

McClelland has undertaken a herculean feat of sociological cataloguing, and offers an ambitious, thorough look at a city that seems to be ripping at the seams.
— Luisa Rollenhagen - Bookforum

Silicon City is firmly in the Studs Terkel tradition of first-person-based explorations of working-class life…Students of inequality and demographics will find powerful anecdotal evidence for how the changing cityscape brings both harm and good.

Thought-provoking…McClelland captures personal snapshots of the changes wrought on San Francisco by the tech industry.
— Booklist

Cary McClelland is a writer, filmmaker, lawyer, and rights advocate whose work has taken him around the world. He met his wife in San Francisco, where they settled down and built their first home. They now live in Brooklyn with their son.
Loading...
or
Not Currently Available for Direct Purchase