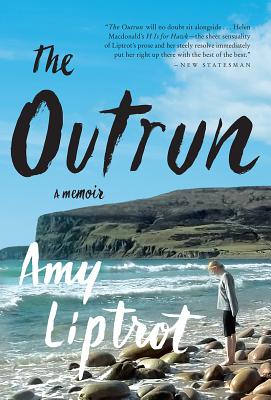 “The Outrun will no doubt sit alongside . . . Helen Macdonald’s H Is for Hawk—the sheer sensuality of Liptrot’s prose and her steely resolve immediately put her right up there with the best of the best.”—New Statesman

When Amy Liptrot returns to Orkney after more than a decade away, she is drawn back to the Outrun on the sheep farm where she grew up. Approaching the land that was once home, memories of her childhood merge with the recent events that have set her on this journey.

Amy was shaped by the cycle of the seasons, birth and death on the farm, and her father’s mental illness, which were as much a part of her childhood as the wild, carefree existence on Orkney. But as she grew up, she longed to leave this remote life. She moved to London and found herself in a hedonistic cycle. Unable to control her drinking, alcohol gradually took over. Now thirty, she finds herself washed up back home on Orkney, standing unstable at the cliff edge, trying to come to terms with what happened to her in London.

The Outrun is a beautiful, inspiring book about living on the edge, about the pull between island and city, and about the ability of the sea, the land, the wind, and the moon to restore life and renew hope.

A Guardian Best Nonfiction Book of 2016

New Statesman Book of the Year


Praise For The Outrun: A Memoir…

Contains unflinching interrogation of [Liptrot’s] self-destructive impulses, but also sharp observations about the metaphysical qualities of her surroundings. . . . The Outrun is slow and lyrical, transitioning from the rush of drinking into the raw sensations of island life.

[Liptrot’s] prose is spare, lean, and beautiful, much like the country about which she writes.
— Booklist (starred)

Spectacular. . . . This magnificent memoir is a record of transformation in its truest sense
— Publishers Weekly

The Outrun is an astonishingly beautiful book… Her account of her addiction and recovery is electric, sexy, immediate, and raw, leaving the reader reeling in her wake. And yet she’s also elegant, thoughtful, and controlled… A luminous, life-affirming book, and I have no doubt that I’ll be pressing it into people’s hands for years to come.

Uncompromising and lyrical…Liptrot’s writing is strong and sure… The Outrun is a bright addition to the exploding genre of writing about place and our place in the natural world.

A lyrical, brave memoir… [Liptrot] walks the hills and dances between the standing stones of Stenness; she joins a wild swimming club and, hauling herself from the gelid waters, ‘naked on the beach, I am a selkie slipped from its skin.’ It’s this aptitude Liptrot has for marrying her inner-space with wild outer-spaces that makes her such a compelling writer—and one to watch.
— Will Self - Guardian

Liptrot is an Orcadian warrior with the breeze in her blood and poetry in her fingers, and The Outrun equals works by fellow islanders such as George Mackay Brown and Peter Maxwell Davies. It may even be a future classic. Wherever she journeys next, you will want to go with her.

Amy Liptrot received the Wainwright Prize for nature writing and the PEN Ackerley Prize for memoir for The Outrun. Formerly a writer for Orkney Today, editor of the Edinburgh Student, an artist’s model, and a trampolinist, she lives in Yorkshire.
Loading...
or
Not Currently Available for Direct Purchase