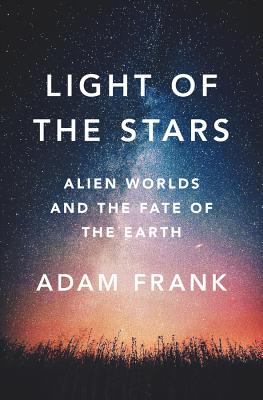 Light of the Stars

Alien Worlds and the Fate of the Earth

Astrophysicist and NPR commentator on what the latest research on the existence and trajectories of alien civilizations may teach us about our own.

Light of the Stars tells the story of humanity’s coming of age as we awaken to the possibilities of life on other worlds and their sudden relevance to our fate on Earth. Astrophysicist Adam Frank traces the question of alien life and intelligence from the ancient Greeks to the leading thinkers of our own time, and shows how we as a civilization can only hope to survive climate change if we recognize what science has recently discovered: that we are just one of ten billion trillion planets in the Universe, and it’s highly likely that many of those planets hosted technologically advanced alien civilizations. What’s more, each of those civilizations must have faced the same challenge of civilization-driven climate change.

Written with great clarity and conviction, Light of the Stars builds on the inspiring work of pioneering scientists such as Frank Drake and Carl Sagan, whose work at the dawn of the space age began building the new science of astrobiology; Jack James, the Texas-born engineer who drove NASA’s first planetary missions to success; Vladimir Vernadsky, the Russian geochemist who first envisioned the Earth’s biosphere; and James Lovelock and Lynn Margulis, who invented Gaia theory. Frank recounts the perilous journey NASA undertook across millions of miles of deep space to get its probes to Venus and Mars, yielding our first view of the cosmic laws of planets and climate that changed our understanding of our place in the universe.

Thrilling science at the grandest of scales, Light of the Stars explores what may be the largest question of all: What can the likely presence of life on other worlds tell us about our own fate?

Praise For Light of the Stars: Alien Worlds and the Fate of the Earth…

A valuable perspective on the most important problem of our time.
— Adam Becker - NPR

Light of the Stars provides a marvelous perspective on how astronomy could make us all better Earthlings.

This enthralling book by a leading astrophysicist places our human drama in its proper cosmic context, showing why civilizations must use their technology to safeguard rather than sabotage their planet's climate.
— Max Tegmark, best-selling author of Life 3.0

This momentous and bracing story is one that Adam Frank, an accomplished astrophysicist and a gifted writer, is uniquely qualified to tell.
— Robert Wright, best-selling author of Why Buddhism Is True

Adam Frank deserves our gratitude for condensing so much fascinating material into this highly readable book.
— Martin Rees, Astronomer Royal and best-selling author of Universe

Frank’s book serves as a kind of cosmic GPS, giving us an orientation that will help us to succeed. As such it really deserves the phrase ‘everyone should read this,’ and happily it’s not just important but also very clear, succinct, and entertaining.
— Kim Stanley Robinson, best-selling author of the Mars Trilogy

An intriguing account of the ongoing search for alien civilizations whose failure to appear may be a warning for humans to get their act together.
— Kirkus Reviews (starred review)

[Frank is] knowledgeable, witty, irreverent, provocative, and very entertaining. . . . [Light of the Stars] offers solid science and lots of fun.

Adam Frank is a professor of astrophysics at the University of Rochester. He is a co-founder of NPR’s 13.7: Cosmos and Culture blog and an on-air commentator for All Things Considered. He also served as the science consultant for Marvel Studio’s Dr. Strange. He lives in Rochester, New York.
Loading...
or
Not Currently Available for Direct Purchase