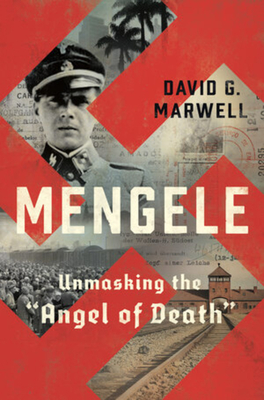 Unmasking the "Angel of Death"

A gripping biography of the infamous Nazi doctor, from a former Justice Department official tasked with uncovering his fate.

Perhaps the most notorious war criminal of all time, Josef Mengele was the embodiment of bloodless efficiency and passionate devotion to a grotesque worldview. Aided by the role he has assumed in works of popular culture, Mengele has come to symbolize the Holocaust itself as well as the failure of justice that allowed countless Nazi murderers and their accomplices to escape justice. Whether as the demonic doctor who directed mass killings or the elusive fugitive who escaped capture, Mengele has loomed so large that even with conclusive proof, many refused to believe that he had died.

As chief of investigative research at the Justice Department’s Office of Special Investigations in the 1980s, David G. Marwell worked on the Mengele case, interviewing his victims, visiting the scenes of his crimes, and ultimately holding his bones in his hands. Drawing on his own experience as well as new scholarship and sources, Marwell examines in scrupulous detail Mengele’s life and career. He chronicles Mengele’s university studies, which led to two PhDs and a promising career as a scientist; his wartime service both in frontline combat and at Auschwitz, where his “selections” sent innumerable innocents to their deaths and his “scientific” pursuits—including his studies of twins and eye color—traumatized or killed countless more; and his postwar flight from Europe and refuge in South America.

Mengele describes the international search for the Nazi doctor in 1985 that ended in a cemetery in Sao Paulo, Brazil, and the dogged forensic investigation that produced overwhelming evidence that Mengele had died—but failed to convince those who, arguably, most wanted him dead. This is the riveting story of science without limits, escape without freedom, and resolution without justice.

Praise For Mengele: Unmasking the "Angel of Death"…

Has much new to tell us, both about Mengele himself and, more significant, about the social and scientific milieu that allowed him to flourish.
— Adam Gopnik - The New Yorker

Compelling....At once a compact biography of the notorious war criminal, a detailed account of Mengele’s flight to South America, and an absorbing narrative of the quest to bring him to justice.
— Patricia Heberer Rice - Science

Authoritative....Marwell’s account is an adventure in pathology and criminology.
— Robert Siegel - Moment

In Mengele, David Marwell has written the final and fascinating history of the ‘Angel of Death.’ His prodigious research results in many new insights into one of the most notorious Nazis. Marwell is convincing in unlocking the long-standing mystery of what motivated Mengele to undertake his gruesome medical experiments on twin children. He also manages to fill in important gaps in Mengele’s postwar life on the run and conclusively settles any lingering questions about whether the bones unearthed in 1985 in another man’s grave in Brazil were those of the fugitive war criminal. Marwell, who played a personal role in some of the events he recounts, displays not only the refined eye of a historian but emerges as a talented storyteller. The often infuriating tale he sets forth moves along effortlessly. At long last, in this important book, Mengele has been captured.

This is a book that only David Marwell could write after half a lifetime of studying and pursuing Josef Mengele. Marwell does more than portray the man, he details his multiple escapes, identities, and careers, the thirty-four-year search for his capture, the political intrigues and rivalries between countries, Nazi hunters, and intelligence agencies that led to Mengele’s grave. A fascinating story of great importance.
— Michael Berenbaum, former director of the United States Holocaust Memorial Museum’s Holocaust Research Institute

Marwell’s lucid and legend-busting account of Josef Mengele’s life and deeds—and of the intricate and elaborate detective work required to find and conclusively identify him—is both absorbing and authoritative.
— Peter Hayes, author of Why? Explaining the Holocaust

A fresh perspective on the notorious Auschwitz doctor, from his infamous experiments to the decades-long postwar search for him. Never losing sight of Mengele’s monstrous activities, Marwell tackles common myths (Why was Mengele really interested in twins? And why his fascination with eye color?) and, chillingly, traces the underlying links between his ‘research’ and respected scientific institutions. Further: as an Office of Special Investigations historian committed to tracking down this elusive mass murderer, Marwell brings special insight and a wealth of detail to his riveting discovery tale.
— Debórah Dwork, author of Flight from the Reich: Refugee Jews, 1933-1946

Sharply written. Part-biography, part-memoir, Mengele is an outstanding achievement that conveys a sense of the man behind the myths and the difficulties of bringing closure for his victims.

David Marwell’s Mengele is a fascinating historical work. How did Dr. Mengele come to epitomize the many medical atrocities committed by trained doctors at Auschwitz? How did he escape? How was he (almost) found? But it is far more than just exceptionally solid scholarship. It is also a thriller and a first-rate detective story written by someone who was part of the team that had to unravel this mystery.

David G. Marwell, former director of the Museum of Jewish Heritage in New York City, is a historian who has served and led a number of government and nonprofit institutions. He lives in University Park, Maryland, with his wife, Judith.
Loading...
or
Not Currently Available for Direct Purchase