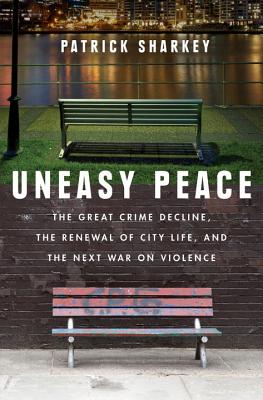 The Great Crime Decline, the Renewal of City Life, and the Next War on Violence

An eye-opening account of the transformation of cities and an urgent call to action to prevent another crime wave.

Over the past two decades, American cities have experienced an astonishing drop in violent crime, dramatically changing urban life. In many cases, places once characterized by decay and abandonment are now thriving, the fear of death by gunshot wound replaced by concern about skyrocketing rents.

In 2014, most U.S. cities were safer than they had ever been in the history of recorded statistics on crime. Patrick Sharkey reveals the striking consequences: improved school test scores, since children are better able to learn when not traumatized by nearby violence; better chances that poor children will rise into the middle class; and a striking increase in the life expectancy of African American men.

Sharkey also delineates the combination of forces, some positive and some negative, that brought about safer streets, from aggressive policing and mass incarceration to the intensive efforts made by local organizations to confront violence in their own communities.

From New York’s Harlem neighborhood to South Los Angeles, Sharkey draws on original data and textured accounts of neighborhoods across the country to document the most successful proven strategies for combatting violent crime and to lay out innovative and necessary approaches to the problem of violence. At a time when crime is rising again and powerful political forces seek to disinvest in cities, the insights in this book are indispensable.


Praise For Uneasy Peace: The Great Crime Decline, the Renewal of City Life, and the Next War on Violence…


The story of the crime
decline is about the wisdom of single steps and small sanities. . . .


It is possible to see this
as a kind of humanist miracle, a lesson about the self-organizing and,
sometimes, self-healing capacities of human communities that’s as humbling, in
its way, as any mystery that faith can offer.
— Adam Gopnik - New Yorker

While many Americans believe crime is on the rise, cities are safer today than at any other point in recorded history. But why? The great crime decline has remained a mystery—until now. With deep knowledge and lucid prose, Uneasy Peace uncovers the multiple forces that brought about this sweeping transformation in modern urban life, forces that were not without their costs. This book profoundly changed how I think about crime, violence, and justice in America.

— Matthew Desmond, author of Evicted: Poverty and Profit in the American City

Uneasy Peace has enhanced my understanding of the decline in urban violent crime. Compelling too is Sharkey’s discussion of ways to avert a possible new wave of national violence. This well-written and carefully researched book is a must-read for anyone residing in our nation’s cities.

— William Julius Wilson, author of More than Just Race: Being Black and Poor in the Inner City

Patrick Sharkey’s achievement in Uneasy Peace is to explain with accessible precision just how much the massive decline in homicide since the 1990s has mattered to the most vulnerable of city-dwellers, African American men. Sharkey also makes clear why this public health triumph is precarious due to our unrelenting focus on criminal justice to the exclusion of community investments. Any student of cities will regard this book as essential reading.

Patrick Sharkey, the leading young scholar of urban crime and concentrated poverty, brilliantly dissects the causes of the great urban crime decline that has brought our great cities back to life, and outlines what it will take to ensure that our cities remain safe, secure, better, and more equitable places for all. Uneasy Peace is a must-read for mayors, city-builders, urbanists, and all those concerned with building and living in great urban places.

— Richard Florida, author of The Rise of the Creative Class and The New Urban Crisis

A rich, complex book that makes splendid use of data to trace the recent renaissance of city neighborhoods and how children and the poor flourish in a time of relative peace.
— Kirkus Reviews (starred)

A well-documented, thoughtful look at major American cities and their comeback from deserted
ghost towns to thriving urban centers. . . .

This engaging,
readable offering should attract interest from city planners, law enforcement, urban dwellers, and anyone
concerned about our cities.
— Booklist (starred)

Patrick Sharkey is professor and chair of the Department of Sociology at New York University. He is also scientific director of Crime Lab New York, an independent organization dedicated to applying and evaluating new methods for addressing crime, violence, and poverty.
Loading...
or
Not Currently Available for Direct Purchase