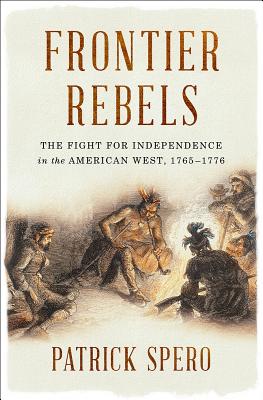 The untold story of the “Black Boys,” a rebellion on the American frontier in 1765 that sparked the American Revolution.

In 1763, the Seven Years’ War ended in a spectacular victory for the British. The French army agreed to leave North America, but many Native Americans, fearing that the British Empire would expand onto their lands and conquer them, refused to lay down their weapons. Under the leadership of a shrewd Ottawa warrior named Pontiac, they kept fighting for their freedom, capturing several British forts and devastating many of the westernmost colonial settlements. The British, battered from the costly war, needed to stop the violent attacks on their borderlands. Peace with Pontiac was their only option—if they could convince him to negotiate.

Enter George Croghan, a wily trader-turned-diplomat with close ties to Native Americans. Under the wary eye of the British commander-in-chief, Croghan organized one of the largest peace offerings ever assembled and began a daring voyage into the interior of North America in search of Pontiac.

Meanwhile, a ragtag group of frontiersmen set about stopping this peace deal in its tracks. Furious at the Empire for capitulating to Native groups, whom they considered their sworn enemies, and suspicious of Croghan’s intentions, these colonists turned Native American tactics of warfare on the British Empire. Dressing as Native Americans and smearing their faces in charcoal, these frontiersmen, known as the Black Boys, launched targeted assaults to destroy Croghan’s peace offering before it could be delivered.

The outcome of these interwoven struggles would determine whose independence would prevail on the American frontier—whether freedom would be defined by the British, Native Americans, or colonial settlers.

Drawing on largely forgotten manuscript sources from archives across North America, Patrick Spero recasts the familiar narrative of the American Revolution, moving the action from the Eastern Seaboard to the treacherous western frontier. In spellbinding detail, Frontier Rebels reveals an often-overlooked truth: the West played a crucial role in igniting the flame of American independence.

Praise For Frontier Rebels: The Fight for Independence in the American West, 1765-1776…

Spero presents convincing support for his thesis that hatred of Indians and desire for their lands played a pivotal role in fomenting the revolution…[Spero delves] deeply into previously underutilized sources…Spero’s thoughtful work is an important contribution to ongoing reassessments of the nature and meaning of the American founding.

Using lively and persuasive prose, [Spero] resets the common account of the American Revolution, moving it from New England to the perilous Western frontier and reveals that the West played a crucial role in the fight for American independence. Frontier Rebels is an important contribution to the ongoing reassessment of the founding of the U.S.

Patrick Spero uses a little-known rebellion that erupted in western Pennsylvania a decade before Lexington and Concord to expose prerevolutionary America in all its ambiguity. The result is history in a grain of sand.
— Woody Holton, author of Unruly Americans and the Origins of the Constitution

Patrick Spero broadens the horizons on the meaning of American independence, expanding the map from the Sons of Liberty in Boston to the Black Boys on the western frontier. Both groups chose to defy British authority for Jeffersonian reasons, but harbored quite different definitions of ‘pursuit of happiness.’ Thus a long lost story that Spero tells with understated elegance.
— Joseph J. Ellis, author of American Dialogue

Patrick Spero shines a bright light on a forgotten stream of the American Revolution, one that flowed from the Indian-hating frontiers of the west rather than from the liberty-loving cities of the east. That stream has been forgotten not just because elite easterners have written so many of our histories but because it reveals so many unsettling truths about the origins of cherished democratic values. This book is must-reading.
— Daniel K. Richter, author of Before the Revolution

In lively and compelling prose, Patrick Spero tells the little-known story of a group of vigilantes who helped to change the course of American history.
— Michael A. McDonnell, author of The Politics of War and Masters of Empire

Shifting his vision away from eastern ports like Boston and Philadelphia to the ‘dark and bloody ground’ of the Pennsylvania frontier, Patrick Spero offers a compelling and important new interpretation of the roots of the American Revolution, one that reveals that the independence of the new United States would come at a terrible cost to North America’s Indian peoples.
— Karl Jacoby, author of The Strange Career of William Ellis

Based on wide reading and archival research, and written in an engaging style, Frontier Rebels provides important and unsettling answers to the questions about the Revolution’s origins that it raises.

When British general Thomas Gage received news of the Black Boys incident in 1765, he instantly smelled a larger rebellion brewing against British rule. We, too, should pay attention. In this dramatic story, Patrick Spero recaptures the significance and gravity of this struggle for independence on the early American frontier.
— David Preston, author of Braddock’s Defeat

Riveting… Written in crystalline prose and populated by a host of colorful characters, this book is ideal for general audiences, undergraduate students, and specialists alike.
— David J. Silverman, author of Thundersticks

A welcome contribution to frontier history.

Patrick Spero is the Librarian and Director of the American Philosophical Society Library in Philadelphia, the oldest learned society in the United States, and the author of Frontier Rebels: The Fight for Independence in the American West, 1765—1776 and Frontier Country: The Politics of War in Early Pennsylvania. He previously taught history at Williams College.
Loading...
or support indie stores by buying on