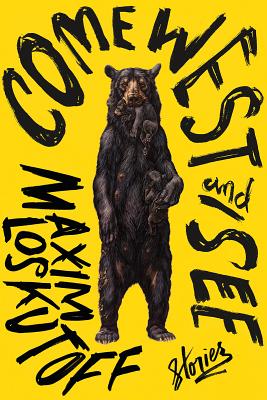 In an isolated region of Idaho, Montana, and eastern Oregon known as the Redoubt, an armed occupation of a wildlife refuge is escalating into civil war. Against this backdrop, twelve stories of ordinary lives explore the loneliness, fragility, and heartbreak inherent to love. Families feel the far-reaching shockwaves of displacement and division. A mother makes a hard choice for her sons when their father goes to lead a standoff with the federal government. An unemployed carpenter joins a militia after his wife leaves him and the first airstrikes raze the streets of his hometown. A former soldier raises the daughter of a dead comrade in a bunker beneath an abandoned farm.

Ranging from the cities to the small towns of the West, and imbued with its own brand of radical empathy, Loskutoff's fiction is both timely and timeless. Come West and See surges with rage, longing, and fear, and offers startling insights into the wounds of the American people.

A new kind of American Western. This book climbs into the heads of its characters, pokes at their insecurities with a sharpened stick, then reaches out a hand to invite you in.
— Jolie Myers, editor, All Things Considered - NPR

Fans of Cormac McCarthy and Russell Banks will find plenty to like in Loskutoff's fresh voice and keen instincts for drama. ... [T]he language is crisp and often thrilling in its plainspoken eloquence.
— LA Weekly

A ferocious love letter to the forgotten and the scorned, Come West and See is unlike any book you'll read this year. It blazes with soul.

Maxim Loskutoff highlights life on the other side—the disenfranchised, angry, sullen, rebellious, gun-packing side. See them attempt to create a homeland of their own.
— William Kittredge, author of Hole in the Sky

Like postcards from a truthful place, Come West And See holds a mirror up to America—a brutal, ferocious image that carries a beauty unto itself.

Violence waits for its moment in the quietest of lives, and Loskutoff shows us that we had better face it and do our best to understand it. A tough, human work of fiction.
— Tom Bouman, author of Fateful Mornings and Dry Bones in the Valley

The strongest characters in this book are the ones who are most adrift, most ready to latch onto whatever comes next, and this makes them both tragic and dangerous ... If there is a great novel to be written about the life of the 21st century interior northwest, then Maxim Loskutoff is a prime candidate to author it.
— FictionWritersReview.com

At
its fiery center, Loskutoff’s humans are caught in brutal personal crossfires:
a fraying couple trying to save their injured pet coyote, a woman plotting to
murder a tree, a militiaman’s wife who blames his death on her sin of
self-pleasure … in Loskutoff’s blade-sharp prose.
— Electric Lit

Perhaps the most tragic aspect of Loskutoff’s characters is that even as they are drawn into the psychological vortex of the Redoubt, they know that the rebellion is futile. . . They have nothing to lose, and so they look for something, anything to believe in.
— Men's Journal

Loskutoff writes a good sentence [and] has a fine eye for the meaningful detail…A welcome arrival.
— Kirkus Reviews

Maxim Loskutoff is the critically acclaimed author of the novel Ruthie Fear and the story collection Come West and See, both winners of the High Plains Book Award. His stories and essays have appeared in numerous periodicals, including the New York Times, Chicago Tribune, Ploughshares, and GQ. He lives in western Montana.