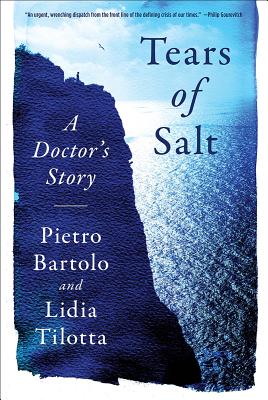 The internationally best-selling personal story of "the doctor on the front lines of the migrant crisis" (CNN).

Situated more than one hundred miles off Italy’s southern coast, the rocky island of Lampedusa has hit world headlines in recent years as the first port of call for hundreds of thousands of African and Middle Eastern refugees fleeing civil war and terrorism and hoping to make a new life in Europe. Dr. Pietro Bartolo, who runs the lone medical clinic on the island, has been caring for many of them—both the living and the dead—for a quarter century.

Tears of Salt is Dr. Bartolo’s moving account of his life and work set against one of the signal crises of our time. With quiet dignity and an unshakable moral center, he tells unforgettable tales of pain and hope, stories of those who didn’t make it and those who did. Tears of Salt is a lasting work of literature and an intimate portrait of a remarkable man whose inspiring message rings clear: "We can’t and we won’t be governed by our fears."


Praise For Tears of Salt: A Doctor's Story…

Through Dr. Bartolo we understand that it is impossible to do nothing in the face of such great human need.
— Vanity Fair

At a time when our broken world seems to be encouraging, and lauding, the worst of humanity, along comes the remarkable Dr. Bartolo to show us what courage, integrity, and compassion look like. His life is a manual of what it means to be human.
— Rabih Alameddine

Tears of Salt is a tender personal memoir of a fisherman’s son turned doctor on the rocky island of Lampedusa, where Dr. Bartolo is at once the savior and the coroner to boatload after boatload of migrants who risk everything to cross the deadly seas. It is also a damning indictment of the broader, collective indifference of humankind to both the drowned and the saved.

Tears of Salt tells the story of people who flee war or poverty in Africa or Asia, survive lethal months and years of travel, then cross the Mediterranean to become the ‘refugees’ we see in the news briefly—if at all. Dr. Bartolo tells us about rescuing everyone he can, burying those he cannot, and saving their stories as if they were his own. This is a personal, urgent, and universal book.

Dr. Bartolo’s spare, poignant, angry account of his life as doctor to the refugees arriving on the shores of Italy is an unusual and important addition to the growing literature of migration. Anyone wanting to understand the disaster of what is happening around us should read this book.
— Caroline Moorehead

There is great hope and poignancy here.
— Kirkus Reviews

Pietro Bartolo was born in Lampedusa to a family of fishermen. He returned to Lampedusa after getting his medical degree, and has been running the island’s lone clinic since 1991. He was featured in Gianfranco Rosi’s celebrated documentary film Fire at Sea, a finalist for the Academy Award.

Lidia Tilotta is a journalist with RAI Regional News and Mediterraneo.
Loading...
or
Not Currently Available for Direct Purchase