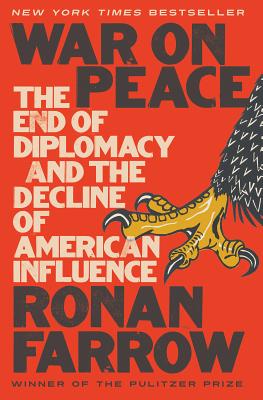 The End of Diplomacy and the Decline of American Influence

A harrowing exploration of the collapse of American diplomacy and the abdication of global leadership, by the winner of the 2018 Pulitzer Prize in Public Service.

US foreign policy is undergoing a dire transformation, forever changing America’s place in the world. Institutions of diplomacy and development are bleeding out after deep budget cuts; the diplomats who make America’s deals and protect its citizens around the world are walking out in droves. Offices across the State Department sit empty, while abroad the military-industrial complex has assumed the work once undertaken by peacemakers. We’re becoming a nation that shoots first and asks questions later.

In an astonishing journey from the corridors of power in Washington, DC, to some of the most remote and dangerous places on earth—Afghanistan, Somalia, and North Korea among them—acclaimed investigative journalist Ronan Farrow illuminates one of the most consequential and poorly understood changes in American history. His firsthand experience as a former State Department official affords a personal look at some of the last standard bearers of traditional statecraft, including Richard Holbrooke, who made peace in Bosnia and died while trying to do so in Afghanistan.

Drawing on newly unearthed documents, and richly informed by rare interviews with warlords, whistle-blowers, and policymakers—including every living former secretary of state from Henry Kissinger to Hillary Clinton to Rex Tillerson—War on Peace makes a powerful case for an endangered profession. Diplomacy, Farrow argues, has declined after decades of political cowardice, shortsightedness, and outright malice—but it may just offer America a way out of a world at war.

Praise For War on Peace: The End of Diplomacy and the Decline of American Influence…

Farrow draws on both government experience and fresh reporting to offer a lament for the plight of America’s diplomats—and an argument for why it matters. ‘Classic, old-school diplomacy,’ he observes, is ‘frustrating’ and involves ‘a lot of jet lag.’ Yet his wry voice and storytelling take work that is often grueling and dull and make it seem…vividly human.
— Daniel Kurtz-Phelan - The New York Times

Offers lively writing, astute commentary, and plenty of great stories, laced through with passion and outrage....Farrow is a natural storyteller, and his empathy and imagination breathe life even into the endless, awkward Thanksgiving dinner that constitutes diplomacy.
— Rosa Brooks - Washington Post

Dogged research and persuasive argument....Farrow brings to his book astonishing access....[he is] an indefatigable and imaginative reporter.
— David Shribman - The Globe and Mail

A compelling mixture of political analysis and personal anecdote.
— Andrew Anthony - The Guardian

Has the United States turned its back on diplomacy, and on its diplomats? And if so, at what cost? Farrow makes a good case that we have, and that the cost will be high....He captures extraordinarily well what the work of diplomacy means.
— Barbara K. Bodine - San Francisco Chronicle

With astonishing reporting and gripping prose, Ronan Farrow tells the powerful story of the gutting of American diplomacy…War on Peace is an indispensable and fascinating revelation of what diplomats actually do for our country and why undermining them is so dangerous. Farrow is a riveting storyteller with a great eye for colorful characters. This is one of the most important books of our time.

Ronan Farrow has scooped us all (again). And it is no wonder. A gifted writer with a powerful intellect and a passion for truth, Farrow has become one of this generation’s finest journalists and War on Peace a book that will be required reading for generations to come. It is perhaps the most riveting and relatable book on foreign policy and diplomacy I have ever read. I have covered these same corridors of diplomatic power, these same bloody war zones, yet on every page of War on Peace I was astonished by what I learned.

US diplomacy has failed to keep up with the times. Part insider account and part sober analysis, War on Peace traces the fall of American diplomacy and pulls no punches. Only someone as incisive and unflinching as Farrow could have written this book—and we should all be thankful that he did. A must-read.

It's hard to imagine there is a single important diplomat Ronan Farrow didn't speak to in the course of reporting this remarkable account of American diplomacy in decline. This is no surprise: who better than a diplomat-turned-investigative-reporter to bring this deeply reported, acutely observed, and morally righteous chronicle of a nation that has all but abandoned diplomacy in favor of high-tech, high-ticket military action at just the perilous moment when steely and patient diplomacy is needed more than ever. This scoop-laden book is essential reading for those of us who yearn for peace and American moral leadership on a fractious planet.
— Lydia Polgreen, former editorial director, New York Times Global, and editor-in-chief, HuffPost

Ronan Farrow is an investigative journalist who writes for The New Yorker and makes documentaries for HBO. He has been an anchor and reporter at MSNBC and NBC News, and his writing has appeared in publications including The Wall Street Journal and The Washington Post. He is a winner of the Pulitzer Prize, the George Polk Award, and the National Magazine Award, among other commendations, and has been named one of Time magazine's 100 Most Influential People. He is also an attorney and former State Department official. He lives in New York City.