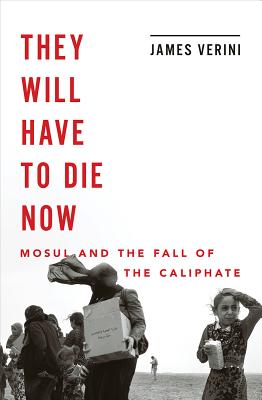 They Will Have to Die Now

Mosul and the Fall of the Caliphate

"They Will Have to Die Now is the story of what happened after most Americans stopped paying attention to Iraq…It will take its place among the very best war writing of the past two decades." —George Packer, author of Our Man and The Assassins’ Gate

James Verini arrived in Iraq in the summer of 2016 to write about life in the Islamic State. He stayed to cover the jihadis’ last great stand, the Battle of Mosul, not knowing it would go on for nearly a year, nor that it would become, in the words of the Pentagon, "the most significant urban combat since WWII."

They Will Have to Die Now takes the reader into the heart of the conflict against the most lethal insurgency of our time. We see unspeakable violence, improbable humanity, and occasional humor. We meet an Iraqi major fighting his way through the city with a bad leg; a general who taunts snipers; an American sergeant who removes his glass eye to unnerve his troops; a pair of Moslawi brothers who welcomed the Islamic State, believing, as so many Moslawis did, that it might improve their shattered lives. Verini also relates the rich history of Iraq, and of Mosul, one of the most beguiling cities in the Middle East.


Praise For They Will Have to Die Now: Mosul and the Fall of the Caliphate…

Most war reporters pay short visits to the front lines, grabbing images and stories that shock us and, at their best, sketch a few details of the larger story. Great ones, like Verini, immerse you in the danger and horror and thrill and black comedy of these places with novelistic detail.
— Mark Bowden - Airmail

(Verini) has written not only a deeply human account of the conflict but also a fascinating historical investigation of Mosul itself.
— Elliott Ackerman - New York Times

A painful, moving, and necessary read… Verini is almost recklessly brave. He embedded himself, whenever he could, with virtually every kind of allied unit fighting ISIS, and he found himself in the middle of the action, constantly. He was present when the snipers opened up, when the car bombs came, and when the mortars fell. (And) because he was so brave — because he spent days, weeks, and months with the men who fought — he was able to capture the truth of war in Iraq (and of Iraq itself) in a way that precious few writers have. In fact, he helped me to make more sense, over a decade later, of my own deployment.
— David French - National Review

A vivid and bare-knuckles account of the fight against ISIS.
— Tom Bowman - NPR

A poignant and detailed profile, beautifully written, of people in war… They Will Have to Die Now is an exceptional study both of modern war and of the most significant battle in the war against Islamic State. I read each page with relish and gratitude.

Verini’s account is startlingly candid and informed. A deeply thoughtful boots-on-the-ground work about a topic that many of us have stopped thinking about.
— Kirkus Reviews

Verini offers up a searing account of the battle against the Islamic State in Mosul in 2016 and 2017, focusing not just on the clashes with the jihadi fighters but also on the plight of the people caught in the middle of the battling forces ... Verini presents with sensitivity the bloody and complicated history of the area, the fraught feelings Iraqis have towards America and its involvement in their country, and the way conflict with the Islamic State has ripped families apart. A must-read for anyone who wants to understand this ongoing and tragic conflict.
— Booklist

They Will Have to Die Now is the story of what happened after most Americans stopped paying attention to Iraq. It’s a small miracle that a writer as good as James Verini witnessed the battle of Mosul. His book is erudite, humane, bleakly funny, and unbearably sad. It will take its place among the very best war writing of the past two decades.

— George Packer, author of Our Man and The Assassins’ Gate

An urgent, scalding, hallucinatory work of war reportage, in the tradition of Michael Herr and Philip Gourevitch. His account…captures the horror, the nobility, and the sheer grinding absurdity of twenty-first-century warfare…A significant achievement.
— Patrick Radden Keefe, New York Times best-selling author of Say Nothing

They Will Have to Die Now is a vivid, captivating, compelling, and graphic account of the major battle against the Islamic State in Iraq, the Battle for Mosul…James Verini conveys brilliantly the often tragic ancient and modern history of Iraq, and he captures superbly the brutal reality of one of the most intense urban battles since WWII. In so doing, he describes the terrible hardships experienced by the Moslawis and both the worst and the best of mankind in war.

— Gen. David Petraeus (US Army, Ret.) former commander of the Surge in Iraq, US Central Command, and Coalition Forces in Afghanistan, and former director of the CIA

Verini’s firsthand account of the Battle of Mosul is a thing of terrible beauty.
— Jonathan Franzen

James Verini’s book stands comparison with the pathbreaking works of modern war journalism that meld into great literature. One has to go back to the Vietnam War and Michel Herr’s Dispatches to find such a vivid, poignant, and historically grounded narrative of an appalling war; a war caused no little by the misdeeds, missteps, and malevolence of the myriad powers and forces that have tried to dominate the Middle East.

With the eye of a novelist and a historian’s sweep, James Verini tells a moving, gripping, complexly layered story of Mosul, from the private calamities of its present to the buried dynasties of its past.
— Larissa MacFarquhar, author of Strangers Drowning

This is a stunning book, brave in its reporting and beautiful in its writing. It is funny and sad and seared into me, and I can’t recommend it highly enough, not just to people interested in the truth of a war but to anyone in search of the truth of humanity.
— David Finkel, Pulitzer Prize–winning reporter at the Washington Post and author of The Good Soldiers

This is such an important and deeply nuanced book. Verini paints absolutely convincing portraits of the Iraqi soldiers trying to take their broken country back, and in humanizing them, he joins the ranks of Liebling and Pyle and Gellhorn—American journalists able to embed so selflessly with soldiers, to listen first and theorize rarely, to tell a story as it happened. He does us and the Iraqis trying to rebuild, after decades of catastrophic war, a service.
— Dave Eggers, best-selling author of Zeitoun, A Hologram for the King, and The Circle

The definitive account of one of the most pivotal and bitter military campaigns of the modern era…This isn’t typical military history, though, but an eyewitness account of what happens to ordinary people who find themselves living on the battlefield, the compromises they must make to stay alive…This is war reporting at its very best.
— Scott Anderson, author of Lawrence in Arabia

James Verini plunges you into the heart of the climactic battle of the Iraq War and won’t let you leave. He seems to be everywhere, gets to know everyone, vividly chronicles everything he sees and hears—and never once calls attention to himself. The weapons may be new—drones and iPads and executions on YouTube—but the blood and confusion and betrayal are as old as war itself. They Will Have To Die Now is an astonishment.

— Geoffrey C. Ward, coauthor of Ken Burns’s The Civil War, The War, and The Vietnam War

James Verini is a contributing writer at the New York Times Magazine and National Geographic. He has also written for The New Yorker, the Atavist, and other publications, and has won a National Magazine Award and a George Polk Award.