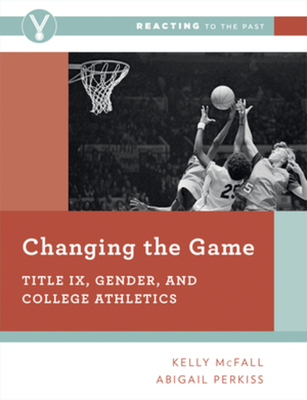 Title IX, Gender, and College Athletics (Reacting to the Past)

Part of the Reacting to the Past series, Changing the Game shows students how a dramatic change in American society began in a debate over Title IX and college athletics.

This Reacting to the Past game is set at a fictional university in the mid-1990s. A debate over the role of athletics quickly expands to encompass demands that women’s sports and athletes receive more resources and opportunities. The result is a firestorm of controversy on and off campus. Drawing on congressional testimonies from the Title IX hearings, players advance their views in student government meetings, talk radio shows, town meetings, and impromptu rallies. As students wrestle with questions of gender parity and the place of athletics in higher education, they learn about the implementation—and implications—of legal change in the United States.

Reacting to the Past is an award-winning series of immersive role-playing games that actively engage students in their own learning. Students assume the roles of historical characters to practice critical thinking, primary source analysis, and both written and spoken argument. Adopted by thousands of instructors at all types of institutions, Reacting to the Past games are flexible enough to be used across the curriculum, from first-year general education classes and discussion sections of lecture classes to capstone experiences and honors programs.

Kelly McFall is professor of history and chair of the humanities division at Newman University in Wichita, Kansas. Since 2013, he has run a popular podcast focusing on new books in genocide studies. In 2014, he won the inaugural Faculty of Distinction award from the Kansas Independent Colleges Association, recognizing his teaching excellence. He is a member of the Reacting to the Past editorial board and author of a forthcoming Reacting to the Past game with Abby Perkiss on Title IX, gender, and athletics.

Abigail Perkiss (Kean University) is an Assistant Professor of History at Kean University in Union, New Jersey. Her first book, Making Good Neighbors: Civil Rights, Liberalism, and Integration in Postwar Philadelphia (Cornell University Press, 2014), examined the creation of intentionally integrated neighborhoods in the latter half of the twentieth century. She completed a joint JD/PhD in U.S. history at Temple University. She is the Managing and Pedagogy Editor of the Oral History Review, and Vice President of Oral History in the Mid-Atlantic Region.
Loading...
or
Not Currently Available for Direct Purchase