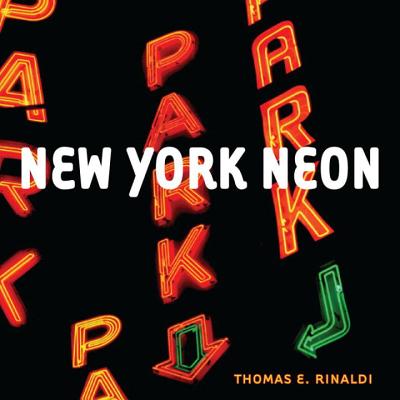 A brilliant visual tour and history of that iconic element of the cityscape: the neon sign.

Treating New York City as an open-air museum, Thomas E. Rinaldi captures the brilliant glow of surviving early- and mid-twentieth-century neon signs, those iconic elements of the cityscape now in danger of disappearing. This visual tour features two hundred signs, identified by location, with information on their manufacture, date of creation, and the businesses that commissioned them. In a generously illustrated introduction, drawing on documents including rare period trade publications, Rinaldi recounts the development of signage and the technological evolution of neon and examines its role in the streets of New York, in America’s cultural identity, and in our collective consciousness.

New Yorkers and visitors to the city, neon-sign enthusiasts, and those interested in signs and historic advertising generally, as well as design professionals, serious historians, and casual students of the city, will want this colorful book, which comes at a critical moment when the disappearance of the original signs has inspired a growing interest in neon.

New York Neon works to artfully and poignantly evoke the medium, whilst examining its role in our collective consciousness. . . . [S]eminal . . .

Rinaldi’s book offers a fascinating account of the neon signs’ history, as well as information about how they’re designed and produced.
— Untapped Cities

Raised near Poughkeepsie in upstate New York, Thomas E. Rinaldi visited New York City frequently before moving there in 2004. His life-long interest in the city’s built landscape drove him to pursue a career in architecture: he works as a designer for Thornton Tomasetti, a leading engineering and architecture firm. Rinaldi holds degrees in history from Georgetown University and in historic preservation from Columbia University. He is the coauthor, with Robert J. Yasinsac, of Hudson Valley Ruins: Forgotten Landmarks of an American Landscape.
Loading...
or
Not Currently Available for Direct Purchase