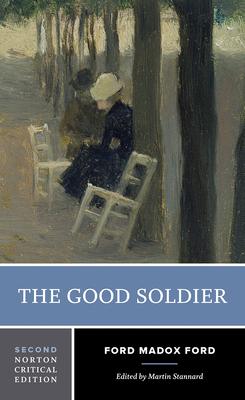 Heralded by Graham Greene as “one of the finest novels of our century,” Ford Madox Ford’s 1915 modernist masterpiece of passion and deceit is now available in a revised and expanded Norton Critical Edition.

Originally titled “The Saddest Story” and heralded by Graham Greene as “one of the finest novels of our century,” Ford’s 1915 tale of passion and deceit in the lives of two married couples is a modernist masterpiece. The Norton Critical Edition of The Good Soldier allows the reader to thoroughly study Ford’s great work and unravel its mysteries and meanings. This Second Edition is again based on the meticulously edited first text of the novel and offers detailed annotation, a note on the text, and sections on textual variants and manuscript development along with pertinent illustrations.

"Backgrounds and Contexts" brings together important appraisals of the work directly following its publication. Reactions from Rebecca West and Theodore Dreiser are included among the reviews. The section also collects critiques on literary impressionism, including one by Ford, and related writings by Henry James and by frequent Ford collaborator Joseph Conrad, among others.

A Selected Bibliography is also included.

Ford Madox Ford wrote over 70 books, including several volumes of poetry and novels such as The Good Soldier.

Martin Stannard is a professor of modern English literature at the University of Leicester, where he has taught since 1979. He was previously Leverhulme Research Fellow in English Literature at the University of Edinburgh. He is the author of Muriel Spark: The Biography, Evelyn Waugh, The Early Years: 1903–1939 and Evelyn Waugh, The Later Years: 1939–1966, and editor of Evelyn Waugh, The Critical Heritage. His many articles and reviews have appeared in Modern Language Review, Essays in Criticism, the New York Times Book Review, the Times Higher Education Supplement, and Novel, among other publications.
or
Not Currently Available for Direct Purchase
Copyright © 2020 American Booksellers Association