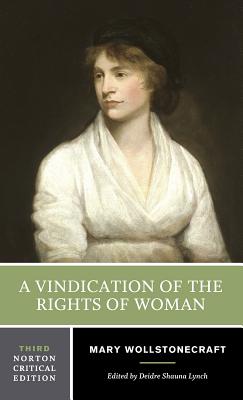 A Vindication of the Rights of Woman (Norton Critical Editions)

Arguably the most original book of the eighteenth century, A Vindication of the Rights of Woman is a pioneering feminist work.

Written during a time of great political turmoil, social anxiety, and against the backdrop of the French Revolution, Wollstonecraft’s argument continues to challenge and inspire. This revised and expanded Third Edition is again based on the 1792 second-edition text and is accompanied by revised and expanded explanatory annotations.


“Backgrounds and Contexts” is also significantly expanded and contains twenty-four works organized thematically into these groupings: “Legacies of English Radicalism,” “Education,” “Wollstonecraft’s Revolutionary Moment,” and “The Wollstonecraft Debate.” Opinions on a variety of reforms that may be compared and contrasted with Wollstonecraft’s include those by John Milton, John Locke, Mary Astell, Jean-Jacques Rousseau, Hannah More, Richard Price, Edmund Burke, Maria Edgeworth, and William Godwin, among others.

A Chronology of Wollstonecraft’s life and work and a Selected Bibliography are also included.

Mary Wollstonecraft (1759–1797) first achieved fame for her A Vindication of the Rights of Woman (1792), in which she extended the radical idea of the "rights of man" to women and laid the groundwork for modern feminism.

Deidre Shauna Lynch is Chancellor Jackman Professor and Associate Professor of English at the University of Toronto. She is the author of The Economy of Character, which was awarded the MLA’s Prize for a First Book, and editor of Janeites: Austen’s Disciples and Devotees and, with William B. Warner, Cultural Institutions of the Novel. She is also an editor of The Norton Anthology of English Literature. She is the recipient of fellowships from the National Humanities Center and the John Simon Guggenheim Memorial Foundation, of the State University of New York Chancellor’s Award for Excellence in Teaching, and of the Northeast Association of Graduate Schools’ Graduate Faculty Teaching Award.
Loading...
or
Not Currently Available for Direct Purchase