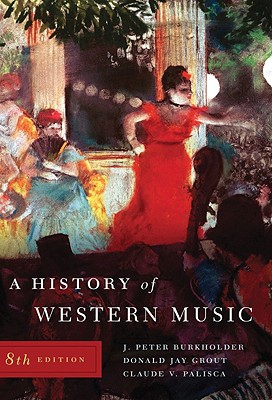 A History of Western Music (Hardcover)

The Eighth Edition of A History of Western Music is a vivid, accessible, and richly contextual view of music in Western culture.

Building on his monumental revision of the Seventh Edition, Peter Burkholder has refined an inspired narrative for a new generation of students, placing people at the center of the story. The narrative of A History of Western Music naturally focuses on the musical works, styles, genres, and ideas that have proven most influential, enduring, and significant—but it also encompasses a wide range of music, from religious to secular, from serious to humorous, from art music to popular music, and from Europe to the Americas. With a six-part structure emphasizing the music’s reception and continued influence, Burkholder’s narrative establishes a social and historical context for each repertoire to reveal its legacy and its significance today.


Claude V. Palisca, late professor of music at Yale University, began his collaboration on A History of Western Music with the Third Edition. Among his many publications are a history of Baroque music and a collection of scholarly essays on Italian Renaissance music.