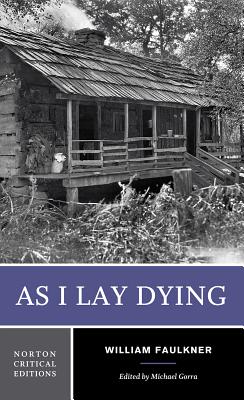 Long been recognized not only as one of William Faulkner’s greatest works, but also as the most accessible of his major novels.

This Norton Critical Edition is based on the 1985 corrected text and is accompanied by detailed explanatory annotations.

“Backgrounds and Contexts” is divided into three sections, each of which includes a concise introduction by Michael Gorra that carefully frames the issues presented, with particular attention to As I Lay Dying’s place in Faulkner’s literary life. “Contemporary Reception” reprints American, English, and French reviews by Clifton Fadiman, Henry Nash Smith, Edwin Muir, and Maurice Coindreau, among others, along with Valery Larbaud’s never-before-translated preface to the first French edition of the novel. “The Writer and His Work” examines Faulkner’s claim to have written the novel in six weeks without changing a word. It includes his comments on the book’s composition along with his later thoughts on and changing opinions of it, sample pages from the manuscript, his Nobel Prize address, and the little-known short story in which he first used the title. “Cultural Context” reprints an essay by Carson McCullers and an excerpt from James Agee’s Let Us Now Praise Famous Men along with other materials that address questions of Southern Agrarianism and the Southern grotesque.

A Chronology and a Selected Bibliography are also included.

William Faulkner (1897–1962) is the Nobel Prize–winning author of The Sound and the Fury and As I Lay Dying, among other works. These two novels were originally published by Liveright in the 1920s.

The author of Portrait of Novel, a finalist for the Pulitzer Prize, Michael Gorra is the Mary Augusta Jordan Professor of English Language and Literature at Smith College and the editor of the Norton Critical Editions of As I Lay Dying and The Sound and the Fury.
Loading...
or
Not Currently Available for Direct Purchase