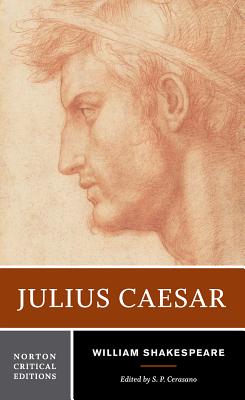 Shakespeare’s tragedy of one of the most famous assassinations in the world at an epoch-changing time in history.

This richly documented Norton Critical Edition of Julius Caesar is based on the 1623 First Folio text. It is accompanied by a note on the text, an introduction that sets the biographical and historical stage necessary to appreciate this richly allusive play, explanatory annotations, a map, and five illustrations.

“Sources and Contexts” presents possible sources as well as analogues to Julius Caesar, an account of Shakespeare’s understanding of and approach to Roman history, and Ernest Schanzer’s study of the narrative challenges posed by the play.

“Criticism” includes early commentary—by, among others, Samuel Johnson, William Hazlitt, and Harley Granville-Barker—on Julius Caesar as well as modern interpretations. Among these are John W. Velz on role-playing in Julius Caesar; Jan H. Blits on Caesar’s ambiguous end; Paul A. Cantor on rhetoric, poetry and the Roman republic; and R. A. Foakes on the themes of assassination and mob violence.

S. P. Cerasano is the Edgar W. B. Fairchild Professor of Literature at Colgate University. She has published numerous books, as well as articles in Shakespeare Quarterly, Shakespeare Survey, Shakespeare Studies, and other academic journals. She is the editor of Medieval and Renaissance Drama in England and has served as a consultant to members of the Archaeology Division of the Museum of London concerning the excavation of the Rose Play house site. She is currently editing Edward Alleyn’s diary.
Loading...
or
Not Currently Available for Direct Purchase