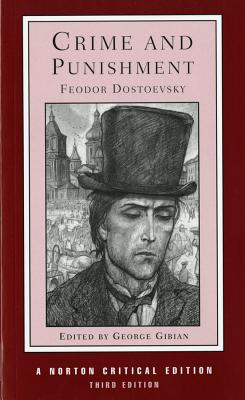 Jessie Coulson’s translation provides the text for the Third Edition of this acclaimed Norton Critical Edition.

New footnotes have been added, based on discoveries by the leading Soviet Dostoevsky scholar, Sergei Belov. "Backgrounds and Sources", highly praised in the Second Edition, remains unaltered. Included are a detailed map of nineteenth-century St. Petersburg, selections from Dostoevsky’s notebooks and letters, and a crucial passage from an early draft of his novel. Noteworthy among the several new "Essays in Criticism" are a little-known but important passage by Leo Tolstoy on Raskolnikov; an essay by Sergei Belov; observations by the Russian literary theoretician and scholar Mikhail Bakhtin; and an essay by the Nobel laureate Czeslaw Milosz. A Chronology of Dostoevsky’s Life and a Selected Bibliography are also included.

Fyodor Dostoevsky wrote The Brothers Karamazov, Crime and Punishment, The Idiot, and many other novels.

George Gibian was Goldwin Smith Professor of Russian and Comparative Literature at Cornell University. His honors include Fulbright, Guggenheim, American Philosophical Society, and Rockefeller Foundation fellowships. He was the author of The Man in the Black Coat: Russia’s Lost Literature of the Absurd, The Interval of Freedom: Russian Literature During the Thaw, and Tolstoj and Shakespeare. He was the editor of the Norton Critical Editions of Tolstoy’s Anna Karenina and War and Peace, and Gogol’s Dead Souls, and of the Viking Penguin Portable Nineteenth-Century Russian Reader. Professor Gibian’s articles have appeared in the Wall Street Journal, The New Republic, the Christian Science Monitor, and Newsday, among others.
Loading...
or
Not Currently Available for Direct Purchase