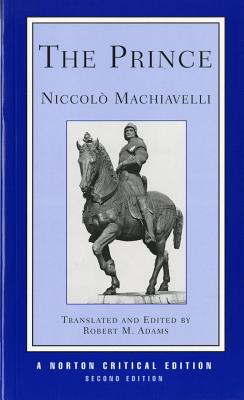 "Backgrounds" relies entirely upon Machiavelli’s other writings to place this central Florentine in his proper political and historical context. Included are excerpts from The Discourses, a report from a diplomatic mission, a collection of private letters, and two poems from Carnival Songs.

"Marginalia" is an eclectic collection of writings germane to both Machiavelli and The Prince. Of the eight selections represented, five of them are new to the Second Edition, including Pasquale Villari’s comic portrayal of Machiavelli’s first diplomatic post in 1499, Francesco Guicciardini’s lofty rebuttal to Machiavelli, and a collection of Tuscan Sayings to further the reader’s understanding of this timeless text.

Robert M. Adams was Professor of English (Emeritus) at the University of California at Los Angeles. He was the author of many books, including Ikon: John Milton and the Modern Critics; Strains of Discord; Proteus, His Lies, His Truth: Discussion of Literary Translation; The Land and Literature of England; and Shakespeare—The Four Romances. In addition to the Norton Critical Edition of Utopia (he was translator and editor of the First and Second Editions), Professor Adams was editor of five other Norton Critical Editions, including The Prince by Machiavelli, Candide by Voltaire, and The Praise of Folly and Other Writings by Erasmus, the texts of which he also translated. He was a founding editor of The Norton Anthology of English Literature.
Loading...
or
Not Currently Available for Direct Purchase